Stillorgan is a village in County Dublin, now enmeshed in the conurbation, close to Dún Laoghaire. Today's village has been transformed with several housing estates, shops and other facilities, though the old village centre still present.

Stillorgan is at least partly contiguous with Kilmacud and neighbours other southside districts.

The suburban region defined as the Stillorgan ward (electoral area) of Dún Laoghaire–Rathdown, an area considerably larger than Stillorgan village, had a population of 19,840 at the 2006 census.

The name of the village is rendered in the Irish language as Stigh Lorgan also Stigh Lorcáin and previously Tigh Lorcáin or Teach Lorcáin.

It is popularly believed that the name 'Stillorgan' is either a Danish or Anglo Norman corruption of Teach Lorcan, which would mean 'house (or church) of Lorcan (Laurence)', possibly signifying Laurence O'Toole.[1] Another belief is that it is named after a Danish or Irish chief of a similar name: what may have been his burial chamber was discovered in Stillorgan Park in 1716.[2][3]

The original Gaelic name for Stillorgan was Athnakill, meaning just 'Place of the Church'.

In the fourteenth century the manor of Stillorgan was held by the Cruise family, from whom it passed to the Derpatrick family, and subsequently to the Fitzwilliams.

The local Roman Catholic parish church of St Laurence is usually presumed to be named after Laurence O'Toole, or Lorcán Ua Tuathail, who was born at Castledermot, County Kildare in 1128, died at Eu in Normandy, and who was canonized in 1225 by Pope Honorius III. He was one of four sons of an O'Byrne princess and Murtagh O'Tuathail, King of the Uí Muirdeaigh III.

The 'Fiddler of Dooney' in Stillorgan Shopping Centre

In the 1930s, sixty houses were built at Beaufield Park. The Merville Estate was subsequently built in the 1950s on land belonging to the Jolly family dairy farm. St Laurence's Park was completed in October 1954.

The first bowling alley in Ireland, the Stillorgan Bowl opened in December 1963.

The first shopping centre to be built in Ireland opened in Stillorgan in 1966.[4][5] When opened, it had three supermarkets, Powers, Liptons and Quinnsworth. The road in front of the shopping centre was completely lined with cottages built during the early 19th century and, to enable the construction of the centre, they were knocked down. They extended from the Christian Brothers' school Oatlands College to the end of the Dublin Road and up the Lower Kilmacud road. The rubble was used to fill in and level the lands that are now Páirc De Burca, the playing field of Kilmacud Crokes. Discussions have been ongoing for many years about expanding and updating the centre. It was planned to be redeveloped by Treasury Holdings in 2008. The 'Blakes'/'Burn Nightclub' site has also planning permission for a multi-story apartment complex with some commercial units. 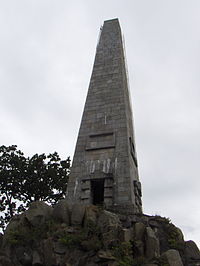 The location of Stillorgan Castle became the House of St John of God when the Hospitaller Order moved there in 1883, it is now a psychiatric hospital.

One of the most prominent architectural features is the large 18th-century obelisk designed by Edward Lovett Pearce for the Second Viscount Allen;[6] Pearce resided in Stillorgan in a house known as The Grove, which was demolished to make way for Stillorgan Bowl.

The present St. Brigid's Church of Ireland was built in 1706 on the site of an earlier church, thought to have been linked to St. Brigid's Monastery in Kildare.[4]

A large open reservoir, called Stillorgan Reservoir, is situated near the Sandyford Industrial Estate. The water is piped from the Vartry Reservoir near Roundwood in County Wicklow. It was built in the 19th century as part of Dublin Corporation's waterworks on the lands of an 18th-century house called Rockland, later known as Clonmore.

Stillorgan's oldest pub is Bolands, latterly styled Bolands on the Hill. While it was reopened as 'McGowan's' following a change of tenant in 2010, but reverted to 'Bolands' in 2012. In its older manifestation it was a local drinking refuge of many South Dublin writers, among them Brian O'Nolan (Myles na gCopaleen) and Maurice Walsh.

Henry Darley's brewery was opened in the 1800s and located near what is now The Grange, Brewery Road. Cullen's was a grocery shop as well as a pub in the 1920s and 1930s. It is now the site of the Stillorgan Orchard which was thatched in the 1980s. It was previously called The Stillorgan Inn.