Eardisley is a village and parish in the Huntington Hundred of Herefordshire about 4½ miles south of the centre of Kington. Eardisley is in the Wye valley in the north-west of the county, close to the border with Radnorshire.

The village is part of the "Black and white village trail", having many timber-framed buildings along its high street. Recent dendrochronology dating work on timbers in these buildings has revealed that some parts date back to the 14th century.

Eardisley Park estate includes the site of Eardisley Castle.[2] The manor house built during the Georgian period burned down in 1999 and was replaced with a replica in 2003.[3] 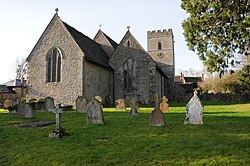 The Church of England parish church of St Mary Magdalene is a 12th-century building noted for its font, carved in about 1150.[4] It is a Norman work of the Herefordshire School and bears some resemblance to the carvings at Kilpeck in south Herefordshire.[4] It combines intricate Celtic knotwork patterns with dramatic scenes, including the Harrowing of Hell and two knights fighting.[4] It is a Grade-I listed building.[5]

The south aisle windows were renewed by the Gothic Revival architect Ewan Christian in 1863.[4]

George Coke, Bishop of Hereford, was buried here. The churchyard extension contains the Commonwealth war graves of a Herefordshire Regiment soldier of World War I and a Royal Engineers soldier and a Voluntary Aid Detachment nurse of World War II.[6]

The Hay Railway was an early narrow-gauge horse tramway that connected Eardisley (10 miles north-east of Hay-on-Wye) with Watton Wharf in Brecon on the Brecknock and Abergavenny Canal. From 1 May 1820, the Hay Railway was joined at its Eardisley terminus, in an end on junction, by the Kington Tramway. Together, the two lines totalled 36 miles in length, comprising the longest continuous plateway to be completed in the United Kingdom.[7] The Hay railway was built to transport goods and freight and passengers were not carried on any official basis. The Hay Railway was absorbed into the Hereford, Hay and Brecon Railway in 1860 and the line was converted to standard gauge[8] for operation by steam locomotives.

The parish has a Women's Institute. The village holds the annual Eardisley Flower Show on August Bank Holiday each year.[9]