Kinnersley is a village in Herefordshire; a place of some 100 souls. It is to be found about five miles east of the border of Radnorshire and ten miles north-west of Hereford. It is on the Black and White Village Trail.

Some of the inhabitants are employed in farming and agriculture. Although many are commuters to Hereford and further afield, or are retired.

The grand house of the village is Kinnersley Castle, an Elizabethan-styled castle which is today a private house. 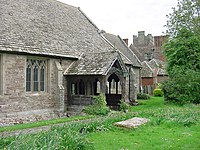 The parish church in the village is St James. It is a 12th century church, and unusually it has a separated tower: a square, stone tower standing immediately west of the church.

The church and its tower

The interior is decorated with intricate paintings and coloured stencil work decorating the ceiling and arches of chancel and nave, executed by G F Bodley, a famous Victorian Arts and Craft architect who marred locally and is buried in the churchyard.

The church also contains a very good, well carved marble 17th century monument to the Smalman family, which Pevsner described as one of the best of its kind in the country.[1]

Surrounding Kinnersley is mostly crops and apple orchards which are owned by local cider companies including H. P. Bulmer. The scenery is outstanding, looking towards the Black Mountains and to Hereford.

There is one public house in the village, the ‘’Kinnersley Arms’’, and the castle.

The main Brecon to Leominster road, the A44 passes through Kinnersley. 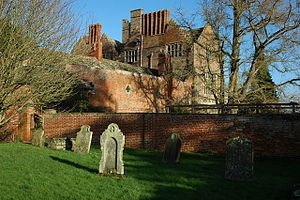 George Frederick Bodley, winner of the Royal Gold Medal for architecture in 1899, restored and improved St James church in the village over many years after marrying Minna Reaveley in 1872. Minna was a daughter of the family who at that time owned Kinnersley Castle.[2] Bodley is buried in a monument in the churchyard.[3]