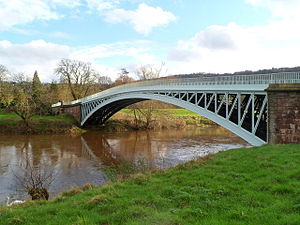 The bridge, crossing the River Wye

Bigsweir Bridge is an 1827 road bridge crossing the River Wye, straddling the boundary between the parish of St Briavels, Gloucestershire and Llandogo, Monmouthshire. It carries the A466 road, and is located about two miles north of the village of Llandogo; two miles south of Whitebrook; and three miles west of the village of St Briavels. It is the Normal Tidal Limit (NTL) of the River Wye, and navigation below this point falls under the jurisdiction of the Gloucester Harbour Trustees.

There is no village at Bigsweir. The bridge is about 660 yds upstream of the fishing weir and ford of Bigsweir, which is close to Bigsweir House.[1] According to Sir Joseph Bradney, the weir, one of many of ancient origin on the river, was named after Buddig or Budic, the father of Euddogwy or Oudoceus, a 7th-century Welsh bishop who retired to Llandogo. Recorded early spellings of the name include Bikeswere and Brithekeswere.[2]

Fishing rights at Bigsweir were mentioned in the Domesday Book. By 1331 the rights were held by the monks of Tintern Abbey, some four miles downstream of the weir, and there were objections to the abbey raising the level of the weir and so impeding navigation. The rights over the weir transferred to the Earl of Worcester in 1537, later passing to his successors, the Dukes of Beaufort.[3]

The Bigsweir estate, on the Gloucestershire side of the weir, was originally part of the lands of the Bishops of Hereford, before the freehold passed to Thomas Catchmay in 1445. It remained the main seat and estate of the Catchmay (or Catchmayde) family for several centuries.[2]

Bigsweir House itself was rebuilt around 1740, probably by William Catchmay (d.1743). It is a building of two storeys built of sandstone, with a symmetrical five-bay front.[3][4] Additions were made to the house after it passed to James Rooke (d.1805). The estate was enlarged by purchases of woodland, and the house itself was refurbished with rich internal decoration, including panelled rooms and elaborate cornices and architraves. Further extensions were added in the 20th century.[5] Bigsweir House is a Grade II listed building, added to the register in 1954.[4]

The elegant cast-iron road bridge was built in 1827 as part of the new turnpike road constructed up the lower part of the Wye valley between Chepstow and Monmouth. There is an abandoned but recently restored toll house on the Monmouthshire side.[6] The bridge comprises a single arch of 160 ft, and was designed by Charles Hollis of London and cast at Merthyr Tydfil.[7] A pair of stone flood arches were added at each end some years later, doubling the length of the bridge.[7] Because of its narrow width, modern traffic using the A466 is controlled by traffic signals at either end.