Leverburgh is a village in Inverness-shire on the south coast of the Isle of Harris in the Outer Hebrides, looking out over the Sound of Harris. It was once a small, ordinary fishing village named Obbe and owes its current name and form to Lord Leverburgh.

Leverburgh is the second largest village of Harris, after Tarbert alone.

The Post Office serving the village was established in 1873.

The nearby area is known for its beautiful beaches, especially along the west coast road.

The name Leverburgh was adopted in 1920, chosen by the owner, Lord Leverburgh when he developed it from a minor fishing village into a new industrial port.

The old name was Obbe. The Gaelic name, which is used on all signposts and maps locally is An t’Ob. Obbe is believed to be derived from a Norse word for a bay or possibly a homestead. 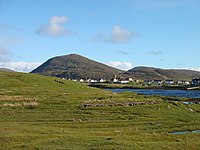 In his 30s, British businessman William Lever, 1st Viscount Leverhulme had fallen in love with the Outer Hebrides having sailed there for recreation. In May 1918, at the age of 66, he bought the Isle of Lewis for £167,000, convinced that he could resurrect the fishing industry. This was during the last year of the Great War. However, in 1919 demobilised servicemen returning to the island started occupying plots on Lewis, seeking the land the government had promised to returning heroes, and though Leverhulme protested and took legal action against the squatters, the Scottish Office sided with the squatters, leaving Leverhulme's development plan in tatters.[1]

Though Leverhulme’s outlay in Lewis had foundered, the seas were still rich in fish and so he looked to develop his plan on the Isle of Harris. In late 1919, he bought the South Harris estate from the Earl of Dunmore for the sum of £36,000 and turned his attentions to the wee fishing village of Obbe, planning to turn it into a consolidated major fishing centre, its catch to be processed and distributed through the 400+ Mac Fisheries fishmonger shops.

Leverhulme chose the site because it gave equal access to the waters of The Minch and the Atlantic and his boats could always find sheltered fishing waters.[2]

In 1920, Obbe with local consent was rebranded Leverburgh, and 300 men started work on a new pier and seashore infrastructure for processing the catch from 50 berthed trawlers. Shoreside construction covered an accommodation block, curing sheds, smoke houses, a refrigeration building, store sheds, houses for the managers and a twenty car garage.[3]

A second stage of development was planned that would have seen the inner sea loch converted into a harbour to accommodate more than 200 trawlers, fitted with a sea lock to ensure a constant depth of water of 25 feet. Leverhulme paid for upgraded roads to accommodate the additional traffic.

After Levehulme had bought the London butchers Wall's in 1920, the economic downturn of 1920-21 slowed development and the London-based Mac Fisheries was incorporated into Lever Brothers Ltd in 1922.[1] By 1924 Leverburgh was ready to start work, and 12 Great Yarmouth drifters landed a quantity of herring so great, that extra female employees were taken in from the mainland to handle the catch.[3]

After making his last visit to Leverburgh in September 1924, Leverhulme took a trip to Africa, where he developed pneumonia. He died in Hampstead in Middlesex on 7 May 1925, and thereafter his executors and the board of Lever Brothers had no interest in the Leverburgh project, and so ended all work. They sold the village and its shore facilities for £5,000, and the estate for £300, to a local family the Campbell brothers. It is estimated that the project cost Leverhulme £500,000.[3]

A Cal Mac ferry service sails across the Sound of Harris from Leverburgh to the isle of Berneray, which is connected to North Uist by a causeway.