Bentham in the West Riding of Yorkshire consists of two villages a mile apart from one another along the River Wenning:

The civil parish containing both villages has a population of about 3,000.

Bentham has a few youth groups for teenagers at the BYC (Bentham Youth Café) which is on the Main Street, Mondays Youth Club which is held by 4Youth and a separate youth drop-in Tuesday, Wednesday and Thursdays run by and held at the Youth Café. There is also Springboard and Adventurers at the Methodist Church for younger children.

The villages lie on the River Wenning, west of the Yorkshire Dales National Park and on the northern edge of the Forest of Bowland. The original centre lay in Low Bentham, but a market was granted to High Bentham in the 14th century, and it became a centre for weaving from the 18th century, particularly after weavers in the town discovered how to weave hosepipes from flax.

High Bentham has some pubs; the Black Bull, the Hogs and Heifer, the Coach House and the Horse and Farrier. The Coach House was previously called The Brown Cow. The town's pubs, and Sport's Club, play host to a number of events for the annual Bentham Bash, organised by the Wrecking Crew[1] Harley Davidson Club.

Low Bentham has the Sundial and the Punch Bowl

The Leeds to Morecambe railway passes through the unmanned Bentham Station. The station was opened in 1850 and has about 18000 users per year. When it first opened it was owned by the "Little" North Western Railway, it was later bought by the Midland Railway and is now operated by Northern Rail.It has recently undergone improvements including the addition of a new information board and flowers being added around the station.

Bentham has its own heritage trail. There are three trails, named purple, pink and blue. The Purple Trail is 2 miles long. This route goes through Ridding Lane Farm and over Shaky Bridge, and has stone stiles fine, flower-strewn paths. 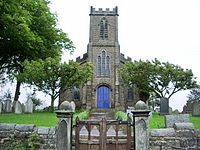 St John the Baptist is one of the oldest churches in the area, and was noted in the Domesday Book in 1086. During restoration work in the 19th century, an Anglo-Saxon cross was discovered in the wall of the tower, and blackened stones in the tower wall are evidence that it was almost totally destroyed by fire after the Battle of Bannockburn in 1314. The church contains a display of Tudor glass, which is similar to some of the glass in York Minster. The present building was built in the 1870s by Richard Norman Shaw, and includes an ancient coffin slab dating from about 1340; the Kirkbeck Stone dating from the 17th century; a 15th-century bell hanging in the porch; and a reredos in Caen stone with marble panels. The church reputedly has the heaviest peal of six bells in Yorkshire, and together weigh 7500 lb. The old organ, which is no longer playable, was built by William Hill of London as a "house organ" for Walker Joy, a prosperous oil merchant in Leeds; his brother designed a hydraulic engine to pump the bellows, making it the first ever to be blown by mechanical power. The churchyard contains a memorial to Robert Poole, a gravedigger, consisting of a sculptured shovel leaning against a tree trunk.

Bentham Golf Club is on Robin Lane. Is an 18-hole course which was established in the 1920s. There are views of Pen-y-Ghent, Ingleborough and Whernside. It has been recently bought by new owners and is no longer owned by the members of the club. It has a members club for all ages, and no level of skill is required to play golf there. It has been described as the Augusta of the Dales because it has seven ponds and features brilliant views.