Beachley is a village in Gloucestershire, adjacent to the border with Monmouthshire. It is located on a peninsula at the confluence of the rivers Wye and Severn, where the Severn Bridge ends and the smaller secondary bridge for the River Wye begins, both bridges carrying the M48 motorway although the motorway is not directly accessible from the village. The tidal range on this stretch of water is the highest in the UK. Before the construction of the bridge it was a ferry port from where the Aust Ferry operated until 1966.

Before the 9th century, the Beachley peninsula and the mouth of the Wye were part of the kingdom of Gwent. A small chapel was founded at what was then the southernmost point of the peninsula - now a tidal island known as Chapel Rock - traditionally in the 4th century by Tecla, a princess of Gwynedd who retired there as a hermit before being murdered by raiders from the sea. A chapel dedicated to St Twrog, perhaps containing a navigation light, was later built on the rock but was ruined before the 18th century.[1] 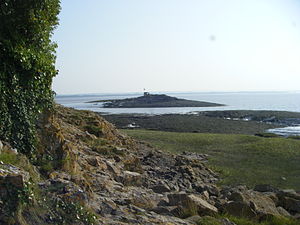 Offa's Dyke, built by the Mercians in the 8th century, cuts off the peninsula to the north. In 956, Beachley was part of lands granted by King Edwy to Bath Abbey. According to historians interpreting the writings of Walter Map, it is likely that Beachley was the site of an unprecedented meeting around 1056 between the unchallenged ruler of Wales, Gruffydd ap Llywelyn, and the king of England, Edward the Confessor, to establish each one's areas of control.[2]

The crossing of the Severn estuary between Beachley and Aust was probably in use from antiquity and was long the chief route. It was recorded in the 12th century when the de Clares, lords of Tidenham, granted quittance of the passage to the monks of Tintern, and was evidently much used in 1405 when great numbers of the English and Welsh were said to resort to the nearby chapel of St Twrog. The manor of Tidenham retained rights over the passage, and received rents from the parishes of Aust and Beachley, until the 19th century.[3]

Beachley was the site of fighting in the Civil War. It was garrisoned by Royalists under Sir John Wintour, but was overrun in October 1644 by Parliamentary forces under Col. Edward Massey.

St John's Church was built in 1833 by Bristol architects Foster and Okely. Its cost was borne largely by James Jenkins, the owner of Beachley Manor.[4] In the 1850s the rector was Rev. G.W. Bridges, an early photographer. 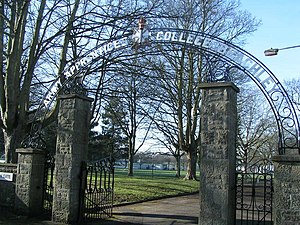 In 1915, during World War I, the government requisitioned a large area of land at Beachley and constructed National Shipyard No.2. However, the war ended before production had begun. Instead, in 1924 it was decided to establish a British Army Apprentices School (which in 1966 was renamed as an Army Apprentices College) at Beachley to ensure a core of qualified soldiers with excellent technical education combined with first class military training as potential NCOs and officers mainly for the specialist corps Royal Engineers, Royal Electrical and Mechanical Engineers Plant Operator mechanics and Royal Army Ordnance Corps.

The AAC closed in 1994, and the army converted the site to an infantry barracks. After the recent reorganisation of the Army, "Future Army Structures" and "Future Infantry Structures" this is now the permanent home of the First Battalion The Rifles.

The old ferry slipway is now used by the Severn Area Rescue Association, whose lifeboat station is next to the slipway. SARA has been running for over 30 years and it is believed to be the second largest UK lifeboat association (the first being the RNLI). SARA is staffed entirely by volunteers.

The Aust Severn Powerline Crossing runs over the river at Beachley to Aust. A tunnel also runs under the River Severn between Beachley and Aust carrying electric cables.