Barton-under-Needwood is a large village in Staffordshire, a mile from the A38 road between Burton upon Trent and Lichfield. It has a population of approximately 5,000 and serves as a commuter centre for many residents working in Lichfield, Tamworth and Burton or further afield in Derby and Birmingham.

The village has a Tudor church, several shops, and a village hall. Local infant/junior schools, and a larger secondary school are also located within the village: John Taylor High School, which serves Barton and the surrounding villages.It has seven pubs, six of which are owned by Marstons. Barton also has a large marina complex on the Trent and Mersey Canal, home to some 300 narrow boats, with shops, a pub, a cinema and restaurants.

Thomas Gisbourne was curate of the village from 1783 to 1820, and was succeeded by his fourth son.

The village sports teams are based at the Holland Sports Club, which has facilities for cricket, football, rugby, tennis, netball and tug of war. The club is named after the Holland family who were resident in Barton for 600 years from the 14th century to the mid 1900s. The earliest recorded member of the family was Richard de Holland who was involved in the Battle of Burton Bridge in the 1320s (see 'Records of the Holland Family' published by William Holland).

The tug of war team have won many national and international honours since forming in 1970 - including the title 'Guinness World Record Holders' for a record in Tug of War Endurance which was created in 2000, being selected to represent England at the 2008 World Tug of War Championships in Sweden and winning a World Open Silver Medal at the 2010 Championships in Pretoria, South Africa. 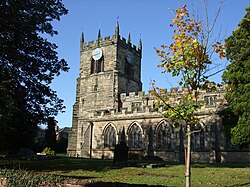 Dunstall Hall is a stately home about a mile outside Barton in the hamlet of Dunstall. It is used as a conference centre and a venue for weddings.

Barton-under-Needwood Golf Club (now defunct) was founded in 1892. The club and course closed in the mid 1920s.[3]

The UK's first Travelodge was opened in 1985 on the A38 just outside the village.