Barnt Green is a village and civil parish in Worcestershire, situated 10 miles south of Birmingham city centre, with a population at the 2011 census of 1,794.[1]

Originating from the development of the railway, Barnt Green has always been a commuter settlement. When the Birmingham and Gloucester Railway was completed in 1840 the only buildings already in existence on an 1880 map were Barnt Green House, probably the oldest recorded bearer of the name Barnt Green, the buildings which made up the railway station, and Sandhills Farm which dates from the 15th century. The early establishment of Barnt Green as a village began with the construction of The Victoria a public house that was originally built as a temperance house at the start of the 20th century. A later map from 1905[2] already shows several buildings, including the Victoria and many of the terraced houses which skirt today's shops.

The majority of the village is a product of the 20th century. Much of its development occurred between the World Wars, with very many houses built between the 1940s and 1970s, and some newer redbrick development.

Despite the proximity of the Birmingham conurbation, the built-up area of the city is concealed by hills to the north and the landscape retains a rural aspect. The area provides an environment for wildlife, including birds, foxes and badgers. 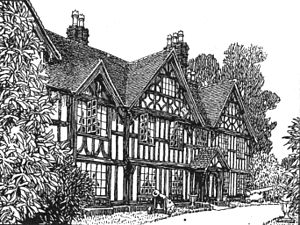 Immediately above (in height) to the north-west are the Lickey Hills Country Park and the Victorian houses of Lickey. Almost immediately to the north is the site of the former Longbridge car factory and beyond that Birmingham.

North-east are Cofton Hackett and the Bittell Reservoirs, with the Worcester and Birmingham Canal running alongside. To the east, farmland stretches from the edge of the factory right across to Hopwood. This large block of rural land forms a part of the Green belt which encircles the settlement.

South-east is the older village of Alvechurch and beyond that Redditch. South of the village, across the M42 motorway, is the large stretch of farmland of Cobley and Tardebigge which runs to the ancient seat of the Earl of Plymouth, Hewell Grange (now a prison).

To the south-west, the Lickey Incline, a stretch of railway, runs down the Bunter geological formation to Blackwell and Bromsgrove. The M5 motorway lies to the west.

Barnt Green railway station is on the Cross-City Line (Redditch to Lichfield) and the Birmingham to Worcester via Bromsgrove Line. The area is close to junctions on the M5 and M42 motorways, as well as the nearby A38 road.

In the centre of the village is a linear shopping street and small park. Other facilities include a sports club, a cricket club, and separate Quaker, Baptist and Church of England churches. St Andrew's C of E First School is also based in the village.