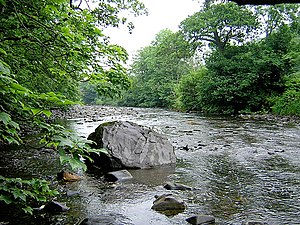 The River Stinchar is a river in Ayrshire. It flows south west from the Galloway Forest Park to enter the Firth of Clyde at Ballantrae, about 12.4 mile (20.0 km) south of Ailsa Craig.

It is reputed that the poet Robert Burns fished the river, and despite being impressed by its beauty, was unable to find words to rhyme with the name.

In the mid 20th century William MacFarlane and his family who lived in nearby Pinmore Lodge among 900 acres built motor boats under the brand of 'Stinchar Craft'.