Audenshaw is a town in south-east Lancashire on the River Tame two miles south-west of Ashton-under-Lyne and five miles east of Manchester. In 2001, Audenshaw had a population of 13,000.[1] By the 2011 Census the population had decreased to 11,419.[2]

The name Audenshaw derives from Aldwin, a Saxon personal name, and the Old English suffix shagh meaning woodland. Nico Ditch, an early-mediæval linear earthwork possibly built as a defensive barrier against Vikings, runs through the area. During the Middle Ages, Audenshaw was a division of the township of Ashton. Audenshaw's urbanisation and expansion largely coincided with developments in textile manufacture during the Industrial Revolution and the Victorian era. In the 1870s, many of Audenshaw's inhabitants were employed in hat-making, cotton-spinning, calico-printing, and silk-weaving.[3] 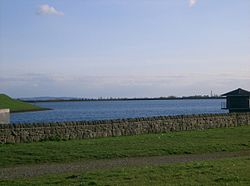 The name Audenshaw is a corruption of its earlier name Aldwinshagh which derives from Aldwin, a Saxon personal name, combined with the Old English suffix shagh meaning woodland.[4]

Nico Ditch, a mediæval linear earthwork, runs through the area. Stretching six miles from Ashton Moss in the east to just east of Stretford in the west, the origin of the ditch is unclear.[5] According to legend, it was completed in a single night by the inhabitants of Manchester, as a protection against Viking invaders in 869–870,[6] and that it was the site of a bloody battle between Saxons and Danes and that Gorton and Reddish got their name from the battle, "Gore Town" and"Red-Ditch".[7][8] Despite the legend, the U-shape of the ditch – as opposed to the usual V-shape of military earthworks – and the absence of an associated bank indicates that Nico Ditch was probably a boundary marker.[9] Although it is thought to be earlier, the earliest documented reference to Nico Ditch is in a charter detailing the granting of land in Audenshaw to the monks of the Kersal Cell. In the document, dating from 1190 to 1212, the ditch is referred to as "Mykelldiche", and a magnum fossatum, Latin for "large ditch".[10]

In 1877, part of the original village of Audenshaw was demolished to make way for the three Audenshaw Reservoirs. Also destroyed to allow the construction of the reservoirs was a section of Nico Ditch.[11] 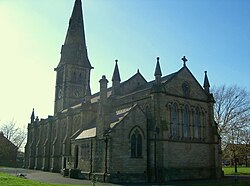 There are nine Grade-II listed buildings in Audenshaw, although no Grade I or II*.[12] These include two lodges which were originally a single barn,[13][14] a trough and pillar,[15] and St Stephen's Church. The church was constructed in 1846, at a cost of £2,900 and provided space for a congregation of 750.[16] Ryecroft Hall, a Grade II listed building,[17] was donated to the people of Audenshaw by the local Member of Parliament, Austin Hopkinson, in 1921. 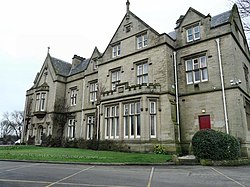 The war memorial at the entrance to Audenshaw Cemetery is also a Grade II listed building and commemorates the 140 men from Audenshaw who lost their lives in World War I. Standing 15 ft tall, it features a bronze statue of a soldier standing on top of a square column. There are slabs of black granite on the fours sides of the column with the names of the deceased. Unveiled in 1920 before a 10,000 strong crowd, it cost £1,300.[18]

The Audenshaw Greyhound Racing and Sports Ground existed from the turn of the 20th century, initially as an athletic and coursing ground and then as a trotting track, speedway dirt track and greyhound racing track until 1934. This is not to be confused with the Athletics stadium that existed on the south side of the Manchester Road.[19]