Anston, first recorded as Anestan is from the Old English āna stān, meaning "single or solitary stone".[2] In the Domesday Book (1086) North and South Anston (Anestan and Litelanstan) were both held by Roger de Busli.

The ancient parish forms part of the wapentake of Strafforth and Tickhill].[3] When civil parishes were created in 1866, Woodsetts became a separate civil parish and the remaining part of the parish became the civil parish of North and South Anston.[4]

The original interest for the area (beyond Anston's agricultural uses) was the sandy "Anstone" Magnesian Limestone, but the real growth in Anston's population was more due to the sinking of the Dinnington Main Colliery in the early 20th century. 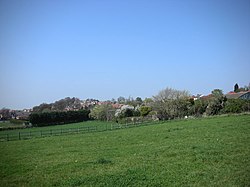 North Anston merges seamlessly into the town of Dinnington to the north. Today, it is largely a commuter base for Sheffield, Worksop and Rotherham, and is mainly made up of suburban housing estates. The picturesque "old village" at the south-east however retains its green, and the village wells. The surrounding landscape contains several disused quarries: the plantations to the east, and Greenlands Park to the west being prime examples.

There are currently three pubs in North Anston: the Little Mester on Nursery Road, the Cutler on Woodsetts Road, and Anston Working Mens pub on Main Street.

North Anston is home to the Tropical Butterfly House, Wildlife and Falconry Centre,[5] a popular attraction seeing around 80,000 visitors every year. 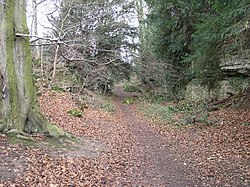 It is also home to the limestone gorge of Anston Stones Wood, a Site of Special Scientific Interest. Anston stones wood stretches across the border of Yorkshire and Nottinghamshire. The wood is believed to be part of a mediæval smuggling route. Evidence of this has been found in the valley an example of this is Dead Man's Cave at Anston Gorge, a large cave carved out of the limestone used for hiding goods. An 1867 excavation of Dead Man's Cave pointed to Palaeolithic occupation, through the discovery of flint tools and a reindeer toe bone.[6]

North Anston is on main Rother Valley South bus routes to Dinnington, Worksop and Sheffield with links to Rotherham too. The nearest railway station from North and South Anston is Kiveton Park and Kiveton Bridge. The X5 and 27 buses provide a link between Anston and the railway station.

South Anston is separated from North Anston by the Anston Brook, the A57 road and a freight railway line. It is more rural than its northern partner. South Anston contains the parish church of St James, and two Methodist chapels (dating from 1871 and 1935). It also contains Anston's working quarries which continue to mine stone for the building industry. Its location is ideal as it is rural enough for enjoy a range walks from the village yet near enough to Sheffield to enjoy a wealth of infrastructure and transport links. There are two pubs in South Anston: the Loyal Trooper and the Leeds Arms.

To the south of the village lies the Chesterfield Canal. It was from a dock just to the south of Dog Kennel Lane that stone taken from quarries in South Anston was transported to London for the rebuilding of the Palace of Westminster following the fire in the 1830s. The blocks of stone were taken by horse-drawn sled to the canal, then taken down to West Stockwith where they were transferred to sailing barges for the journey to London.[7]

Anston Athletic F.C. competed in the FA Cup during the 1920s.