Almondsbury is a large village and parish in southern Gloucestershire, near junction 16 of the M5 motorway. The civil parish also includes the villages of Hortham, Gaunt's Earthcott, Over, Easter Compton, Compton Greenfield, and Hallen. When it was originally created in 1866 the civil parish also included Patchway, but not Easter Compton, Compton Greenfield, Hallen, Cribbs Causeway or Charlton, all of which were transferred from the civil parish of Henbury in 1935. The parish of Patchway was separated from Almondsbury in 1953.[2]

The village is split by a steep hill, part of the escarpment overlooking the Severn floodplain. At the bottom of the hill is Lower Almondsbury where a pub and hotel, The Bowl Inn, is situated. The Monmouthshire coast, the Forest of Dean, the River Severn and both Severn Bridges are visible from the higher parts of the village. The village is perhaps best known for the M4/M5 junction, which is known as Almondsbury Interchange. 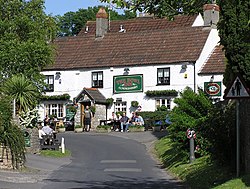 The pub takes its name from the bowl shape of the land surrounding the estuary. Parts of this whitewashed-stone inn were originally the three cottages erected in 1146 to house the monks building the adjacent church of St Mary the Virgin. The present building became a licensed inn in 1550.[3] 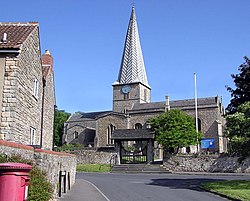 Also at the bottom of the hill is the local church, dedicated to Saint Mary the Virgin.

The church and tower were built in 1140. The lead-covered spire was added some time before 1619.

In 1817, a woman purporting to be Princess Caraboo was found in the town, in what was to become one of the more elaborate deceptions of the period.[4]

Another pub, The Swan Inn, is located on the A38 road, in the upper part of the village, almost opposite an open space known as Almondsbury Tump.

In March 2009 a community shop was opened in the village by the not-for-profit Almondsbury Community Services Association (ACSA), situated opposite the Old School Hall at 14 Church Road. The community shop is staffed entirely by unpaid volunteers. The aim of the project goes beyond a village shop, being a service for the village, to support local suppliers wherever possible, and to be another focal point where people in the village can meet. A proportion of the surplus generated by the shop is returned to community projects and organisations in the village.

The village also has a motorway police station, a garden centre, and a pub/restaurant.

Other sporting facilities include a cricket pitch and a rugby pitch. Almondsbury Tennis Club [1] is situated on the same site.

Education is provided by Almondsbury Church of England Primary School. This is a state maintained school. The Ofsted report, dated April 2009, rated the school as good (outstanding in places). For secondary education Almondsbury is served by Patchway Community College.

Almondsbury is the birthplace of Alex Kapranos, the lead singer of the band Franz Ferdinand.[5]