Alderley is a village in Gloucestershire, about fourteen miles south-west of Stroud and two miles south of Wotton-under-Edge. It is situated on the Cotswold Way near to the hamlets of Hillesley and Tresham and sits at the foot of Winner Hill between two brooks, the Ozleworth and Kilcott.[1]

The name has also had the spelling Alderleigh.

The village has an entry in the Domesday Book of 1086, where it is referred to as Alrelie[2] meaning "Woodland clearing where alders grow" (from OE alor + lēah).[3] It is recorded as being located in the hundred of Grimboldestou with a total population of 16 households, with 7 villagers, 5 smallholders, 4 serfs, whilst also having 2 lord's plough teams, 7 men's plough teams, 12 acres of meadows and 1 mill. In 1066 the Lord of the Estate was the English thegn Wigot of Wallingford, but in 1086 it was the wealthy Norman landowner Miles Crispin.[4]

In the 16th and 17th centuries, the village contained a number of woollen mills,[1] and in Samuel Rudder's A New History of Gloucestershire published in 1779 he states that Alderley had been home to the clothing industry for hundreds of years.[6]

In Samuel Lewis’s 1831 A Topographical Dictionary of England, Alderley is described thus:

ALDERLEY, a parish in the upper division of GRUMBALD'S ASH, county of GLOUCESTER, 2 miles (S.S.E.) from Wotton under Edge, containing 235 inhabitants. The living is a discharged rectory, in the archdeaconry and diocese of Gloucester, rated in the king's books at £ 11. 4. 7., and in the patronage of Mr. and Mrs. Hale. The village is situated on a hill between two streams, which unite and fall into the LOWER AVON. Cornua ammonis and other fossils are found here. Sir Matthew Hale, Lord Chief Justice in the reign of Charles II., born here 1 November 1609, lies interred in the church. 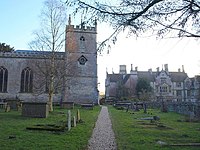 The parish church is St Kenelm's. The tower dates back to around 1450, but the church underwent a thorough restoration in the Georgian period, during which it was rebuilt in the Gothic style, in 1802.

Marianne North, the biologist and botanical artist, is buried in the churchyard.