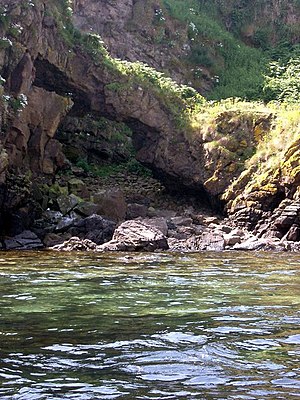 A natural arch on Sheep Island

Sheep Island is a small island situated off the southern tip of the Kintyre peninsula in Argyllshire.

Sheep Island, along with Sanda Island and Glunimore Island, form a small group of islands approximately two miles south of Kintyre at NR733055.

Running roughly north to south, the island is around 650 yards long, and is steep and precipitous along the west coast, rising to a maximum height of 135 feet. There is a cave on the west coast and a natural arch at the northwest of the island. A considerable reef of drying rocks surrounds the island and makes landing on the island problematic. There are a number of strong tidal races in the area and one, known as Tum ba nach, extends north from Sheep Island to around halfway across the Sound of Sanda.

As the name suggests, sheep have traditionally been grazed here, however the island is more notable as the primary breeding ground for puffins in the Firth of Clyde. From here the birds are returning to nearby Ailsa Craig, where they were once wiped out. guillemots and razorbills also nest on Sheep Island.