Difference between revisions of "Wey and Arun Canal" 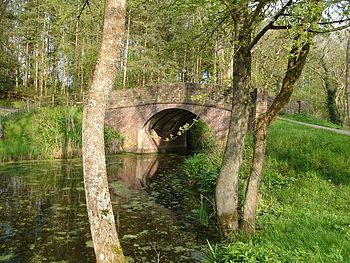 The Wey and Arun Canal is remarkable and somewhat eccentric canal running from southern Surrey and through and across the Weald deep into Sussex. Abandoned in the mid-19th Century, today the Wey and Arun is partially restored

As it passes through a rural landscape, there was little freight traffic to justify the existence of the canal; it had a relatively short working life and was officially abandoned in 1871

The route of the canal is 23 miles, running southwards from the River Wey at Shalford, Surrey to the River Arun at Pallingham, in Sussex. The canal comprises parts of two separate undertakings – the northern part of the Arun Navigation, between Pallingham and Newbridge Wharf, which opened in 1787, and the Wey and Arun Junction Canal, which connected the Arun at Newbridge to the Godalming Navigation near Shalford, south of Guildford, opened in 1816. The canal was built with 26 locks.

Without maintenance, the canal gradually became derelict over much of its length. However, since 1970, active restoration by The Wey & Arun Canal Trust has resulted in several miles of the waterway being restored to navigable standard. Work is continuing, with the ultimate aim of re-opening the entire canal to navigation.

The River Arun was used in an unimproved condition for centuries, but work was carried out on the river itself and the port of Arundel in the 16th century, which allowed boats to reach Pallingham Quay near Pulborough by 1575.[1] An Act of Parliament received the Royal Assent on 13 May 1785, entitled "An Act for amending and improving the Navigation of the River Arun, from Houghton Bridge, in the parish of Houghton, in the county of Sussex, to Pallenham Wharf, in the parish of Wisborough Green, in the said county; and for continuing and extending the Navigation of the said River Arun, from the said Wharf, called Pallenhara Wharf, to a certain Bridge, called New Bridge, situate in the parishes of Pulborough and Wisborough Green, in the said county of Sussex".[2]

The 1785 Act authorised works to improve the Arun upstream from Houghton Bridge (the tidal limit) to Newbridge, near Billingshurst. The route involved a new artificial cut of 4½ miles from Newbridge along the river to Pallingham, crossing the river by an aqueduct[3] on three strong brick arches at Lordings Lock near Wisborough Green.

An undershot waterwheel of a design unique on the waterway system was built into the aqueduct. Driven by the flow of the river this had scoops on the back of the blades which raised a small proportion of the flowing water into the higher canal. This was completed in 1787.

A second artificial cut was added in 1790 from Coldwaltham to Stopham, including a 375-yard tunnel under Hardham Hill,[4] which avoided a large bend in the river near Pulborough, saving 5.0 miles (8.0 km).[5]

The route of the Navigation from Newbridge to Houghton was 13 miels with six locks.[3] The river continues a further 15½ miles to the sea at Littlehampton.[5]

The last barge to travel on the section between Pallingham and Newbridge was recorded in 1888, and Hardham tunnel was closed in 1889. The artificial cuts were officially abandoned in 1896, but limited traffic continued on the old river sections into the 20th century, notably bricks from Harwoods Green below Pallingham and chalk from Houghton Bridge;[6] they were finally stopped in 1938 by a new, fixed bridge on the Havant to Brighton railway line at Ford.

The first scheme to link the Wey and the Arun was proposed in 1641. Tributaries of both rivers were only 2 miles apart, and a canal to bridge this distance was submitted as a bill to Parliament, but was dropped when it reached the committee stage. Another scheme, which would have linked up the rivers Adur, Arun, Mole and Wey, was suggested in 1663, but was not pursued.[7]

In 1810, the 3rd Earl of Egremont began to promote the idea of a canal to link the Rivers Wey and Arun, separated by only 15 miles. Part of the justification for this canal through a very rural area, with few of the cargoes which had made other canals profitable, was to provide an inland route from London to Portsmouth and the south coast; an important consideration as Britain was at war with France and thus coastal shipping at risk of attack.

Josias Jessop (son of the better known William Jessop) was appointed consulting engineer in 1811. It was his first job as an independent consulting engineer since he had established his reputation constructing Bristol Harbour.[8] He made an estimate of £72,217 for construction of the canal, which he increased to £86,132 in May 1812, when he re-surveyed the route and part of it was changed. A survey was carried out in 1811 by Francis and Netlam Giles for an alternative route, 37 miles long, from the Surrey Iron Railway at Merstham to Newbridge, by way of Three Bridges, Crawley and Horsham. A petition was presented to Parliament, but the scheme got no further.[9] 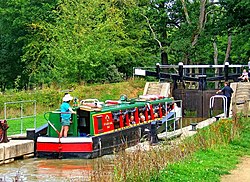 An Act of Parliament received the Royal Assent on 19 April 1813, entitled "An Act for making and maintaining a navigable Canal, to unite the Rivers Wey and Arun, in the counties of Surrey and Sussex". This authorised the construction of the canal from the Godalming Navigation (an extension of the River Wey) near Shalford, south of Guildford to the northern terminus of the Arun Navigation at Newbridge.[10] May Upton was appointed resident engineer in July, and work began. Jessop designed all the main structures, including aqueducts, bridges, locks and cottages for the lock-keepers. The canal was 18½ miles long, had 23 locks and was suitable for 30-ton barges. Construction was completed in September 1816, having cost £103,000.[8]

By the time it was opened, however, the war with France was over and thus one of the key reasons for its construction was removed. As a result it was never very prosperous, but did reasonably well, with a maximum of 23,000 tons carried in 1839. However, railway competition hit hard in 1865 with the opening of the Guildford and Horsham Railway, which was in direct competition with the canal.[11] There were also engineering problems with few sources of water to tap into, compounded by porous soil on the summit level, which led to water shortages.

In 1867, a group of people cruised along the canal, and the trip was the subject of a book called The Thames to the Solent by Canal and Sea, published in 1868,[12] the same year in which an Act of Parliament authorised closure.[13] It was offered for sale in 1870, but officially abandoned in 1871, with the land sold to many along its route, although the canal company was not wound up until 1910.[11] After a century of disuse, the canal is being restored by The Wey & Arun Canal Trust. 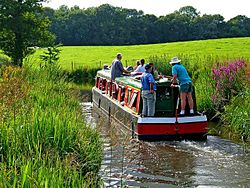 On the Wey & Arun

Interest in the canal was sparked by the publication in 1965 of P.A.L. Vine's book London's Lost Route to the Sea. As a result, the Daily Telegraph weekend magazine carried a 5-page article about the canal.[14] In 1968, a local group of enthusiasts became interested in the canal, and having carried out some research into its history, formed the Wey & Arun Canal Society in 1970, with a view to reopening it.[15] The Society evolved into The Wey & Arun Canal Trust in 1973, a private company limited by guarantee with no share capital,[16] the present custodians of the canal restoration. In 1990, the restoration was identified by the Inland Waterways Association's Restoration Committee as one of those where significant progress was being made, and which would benefit from the backing of the Association.[17] The Waterway Recovery Group, which gave active support to restoration schemes, developed a strategy of "a guaranteed labour force for guaranteed work" in 1992, which ensured that local societies would have the funding and relevant planning permission in place before a group of volunteers arrived to carry out the work. The Wey and Arun Canal was one of three schemes where working parties were run in this way.[18] The practical outworking of this approach was demonstrated in the following year, when a section of the canal at Billingshurst was cleared, and three accommodation bridges were rebuilt by a working party of 250 people, as part of a Waterway Recovery Group initiative called "Dig Deep".[19]

The Trust has reached agreements with several landowners to allow restoration work to be undertaken over half the length of the 23-mile canal. By 2009, twenty-four bridges had been reconstructed, eleven locks restored, two aqueducts re-instated, and several miles of canal bed cleared and dredged.[20] 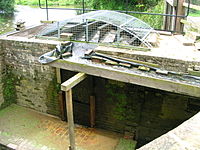 The Lordings Lock waterwheel was reconstructed by Winston Harwood during the first decade of the 21st century.[21] In 2010 the main spindle of the wheel broke and the wheel was rebuilt to a more effective design.[21]

Devil's Hole Lock had been partially destroyed by the Canadian army as part of a training exercise in 1942, but has been rebuilt and extended to take 72-foot narrowboats. The lock was reopened on 17 April 2010, and the opening ceremony was carried out by Colonel Paul Rutherford, the Senior Army Adviser to the Canadian High Commissioner.[22] Working parties have since concentrated on Southland Lock, which requires significant rebuilding, as many of the original bricks were removed in the 1930s, to be re-used by a local religious order.[23] 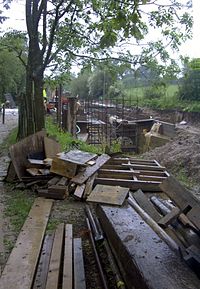 The new Loxwood Lock, under construction, 2006

The hump-backed road bridge at Loxwood was removed and in-filled in 1905, severing the canal and leaving a major obstacle to restoration. The last boat passed under the bridge in 1869.

Modern regulations prevented the installation of a replacement hump-backed bridge, so restoration required the canal to burrow underneath, leaving the road at its existing level. This was a major engineering exercise, achieved by lowering a 440-yard length of canal so that there is adequate headroom for a boat to pass under the road. At the southern end of the length, Brewhurst Lock was reconstructed reducing its fall to 2 feet from the original drop of 8 feet and hence lowering the level of the water in the pound crossed by the bridge. At the other end, a new lock (Loxwood Lock) was constructed, to provide for the 6-foot difference between the new and original levels of the canal. In between, the canal bed was lowered by 4 feet 6", the banks shored up with piling, and a new winding hole created.

The new bridge crosses the canal on a skew angle, the resulting 'tunnel' through which the canal passes is 25 yards long. The towpath runs through the tunnel, alongside the canal, and also allows pedestrians to cross the road safely; however, the restricted bridge height means horse riders must cross at road level. Suitable access pathways had to be designed-in as the towpath is a bridleway at this point.

The work was completed, and the first boat passed under the new bridge into the new Loxwood Lock in April 2009. The project cost £1.8 million, making it one of the most expensive projects to be undertaken by a volunteer canal trust, and was officially opened by Lord Sterling of Plaistow on 9 May.[24] The Canal Trust website includes a comprehensive photo-diary of the construction work.

The design of the bridge was not appreciated by many of the residents of Loxwood, because of its steel barriers, and following a period of consultation and fund-raising, planning permission was obtained to replace them with lower, brick-faced parapets, to match the adjacent lock and footbridge.

The lock and footbridge achieved second place in the Royal Institution of Chartered Surveyors Community Benefit Awards in 2010. The Trust's success was particularly welcome, as it was the only entry in the category by a voluntary organisation, rather than a professional one.[25] The scheme, which cost £1.9 million, was also the winner in the Community category of the 2011 Waterways Renaissance Awards. The Awards are made annually by the Waterways Trust.[26]