Not to be confused with Yarrow Water 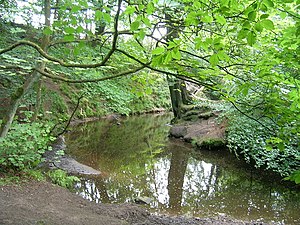 The River Yarrow in Duxbury Woods

The River Yarrow is in Lancashire, with its source at an area called Will Narr at Hordern Stoops, along Spitlers Edge on the West Pennine Moors. The river feeds the Yarrow Reservoir, which in turn feeds the Anglezarke and Upper and Lower Rivington Reservoirs.

Upon leaving the reservoirs by way of a pumping station, the river passes through an area that was once known as Abyssinia. The area in question is within the boundaries of the parishes of Heath Charnock and Limbrick, but the name 'Abyssinia' was given because it was a route frequented by coal miners, who with their coal-black faces were said to look like natives of Abyssinia.

From Abyssinia, the river flows underneath the Leeds and Liverpool Canal, joining Black Brook at Yarrow Bridge and broadening, then continuing through the ancient woodland of Duxbury into Yarrow Valley Park beside Euxton and on through Eccleston and Croston, where it feeds the River Douglas at Sollom just before the latter river finishes its own course into the River Ribble's brackish final stretch.

The entire course of the River Yarrow falls within and around Chorley and its surrounding villages.

After suffering many years of pollution due to effluent discharge from Whitter's factory and Stanley's factory, the river is now much cleaner, and as such has attracted birds such as dippers, grey wagtails and kingfishers, and fish including trout, chub, dace and barbel.

Fish passes have been installed at Pincock, Birkacre and Duxbury, to enable upstream spawning of fish which would be unable to navigate the weirs. Salmon have been recorded at Duxbury for the first time in over 100 years.[1]