Paisley Abbey is a former Cluniac monastery, and current Protestant, Church of Scotland parish kirk, located on the east bank of the White Cart Water in the centre of the town of Paisley in Renfrewshire.

It is believed that Saint Mirin (or Saint Mirren) founded a community on this site in 7th century. Some time after his death a shrine to the saint was established, becoming a popular site of pilgrimage and veneration. The name Paisley may derive from the British language Passeleg, derived from the Greek 'basilica', for a major church, recalling an early, though undocumented, ecclesiastical importance.

In 1163 Walter FitzAlan, the first High Steward of Scotland issued a charter for a priory to be set up on land owned by him in Paisley. It was dedicated to the Virgin Mary and Saints James, Mirin and Milburga. Around 13 monks came from the Cluniac priory at Much Wenlock in Shropshire to found the community. Paisley grew so rapidly that it was raised to the status of abbey in 1245. Monks from Paisley founded Crossraguel Abbey in Carrick, Ayrshire in 1244.

In 1307, King Edward I of England had the abbey burned down. However, it was rebuilt later in the 14th century. William Wallace, born in nearby Elderslie is widely believed to have been educated for some time when he was a boy in the abbey.[1]

In 1316 Marjorie Bruce, daughter of Robert I of Scotland and wife of Walter Stewart, 6th High Steward of Scotland, was out riding near the abbey. Heavily pregnant at the time, she fell from her horse and was taken to Paisley Abbey where she died, but not before she gave birth to a boy who became King Robert II, the first of the House of Stewart. For this reason the church calls itself "The Cradle of the Royal House of Stuart".

Queen Marjorie was buried at the Abbey. In the abbey itself there are signs which indicate that Marjorie's baby was cut out of her womb, a caesarean delivery long before anaesthesia was available. A cairn, at the junction of Dundonald Road and Renfrew Road, approximately one mile to the north of the Abbey, marks the spot where she reputedly fell from her horse.

In 1491, King James IV received absolution from Abbot George Shaw in the presence of the relics, for him and others implicated in the death of his father King James III at the Battle of Sauchieburn. By 1499 Shaw had had built a new, larger pilgrims chapel and added the sculptured stone frieze which can still be seen today, showing scenes from the life of St Miren. It was originally brightly painted and may have been part of a rear panel of an altar before being put up as a frieze on the wall.[2]

Paisley Abbey from the south-west

A succession of fires and the collapse of the tower in the 15th and 16th centuries left the building in a partially ruined state. Although the western section was still used for worship, the eastern section was widely plundered for its stone. From 1858 to 1928 the north porch and the eastern choir were reconstructed on the remains of the ruined walls by the architect Macgregor Chalmers. After his death, work on the choir was completed by Sir Robert Lorimer.[3]

Paisley Abbey from the west 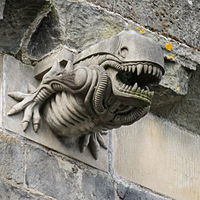 The Abbey organ is reputedly one of the finest in Scotland and was originally built by the French organ builder Cavaillé-Coll of Paris in 1872. Since then it has been rebuilt and extended four times. The organ as rebuilt by Walkers in 1968 has 4 manuals, 65 stops and 5448 pipes.(National Pipe Organ Register; "The Organ at Paisley Abbey", booklet pub. Paisley Abbey) In 2009 the instrument underwent a major restoration by Harrison and Harrison of Durham. The work included major cleaning and servicing, the provision of a new wind system and the addition of a 32 ft contre bombarde. The latter was part of the 1968 scheme by Ralph Downes but not included in the work actually undertaken.

The twelve angel corbels and stone communion table are by Pilkington Jackson, sculptor of the iconic Robert the Bruce statue at Bannockburn. The ceiling bosses are designed by Sir Robert Lorimer and carved by James A Young. The choir stalls, with their wealth of carved animals are by William and Alexander Clow.[8]

During a refurbishment in the early 1990s, the twelve gargoyles above the cloister on the south-west were replaced. One of them is modelled on the creature from the 1979 film Alien.[9]

Paisley Abbey is used for services of worship every Sunday. Since the Reformation the Abbey has served as a parish church in the Church of Scotland.