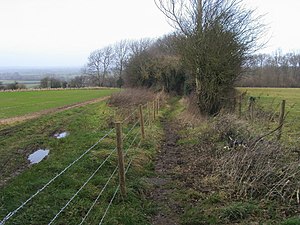 The Oxford Green Belt Way is a long-distance path in Oxfordshire and Berkshire, circling the City of Oxford.

The route follows a circular route of fifty miles through the Oxford Green Belt surrounding the city. The route was devised in 2007 to mark the Campaign to Protect Rural England 75th anniversary and to highlight the importance of the Green Belt.[1] On its launch each mile on the route marks one year since the designation of the greenbelts in 1956.

In the east, the path follows the East Oxford Limestone Heights. Starting from Shotover (Oxfordshire) outside the eastern fringe of Oxford, it passes Shotover, Horspath and Garsington.

The path then passes through the park of Nuneham House and to the north of Culham, to reach the River Thames opposite Abingdon. Here it crosses the river into Berkshire.

From Abingdon, the route follows Thames Path upstream to turn away from the riverbank to reach Radley. From here the path heads in a north-westerly direction through Berkshire to Boars Hill and Cumnor.

The path from the river at Godstow runs to Wolvercote beside it, on the northern edge of Oxford. It then heads north by the Oxford Canal Walk for four miles north to Shipton-on-Cherwell. Here the path heads east briefly then south-east across the water meadows of the River Cherwell to Hampton Poyle and Gosford. The path then crosses the corallian limestone hills of Elsfield and Beckley to return to Shotover.