Radley is a village in Berkshire about two miles north-west of the centre of Abingdon. The parish forms part of the county's Hormer hundred, and includes the hamlet of Lower Radley on the River Thames.

The parish church of Saint James the Great was built in about 1290.[1] The church is built of stone, but unusually its roof is supported by wooden pillars installed by a mediæval Abbot of Abingdon who was told in a vision to "seek [them] in the forest".

The present south aisle dates from the 14th century but the chancel, nave and bell tower were rebuilt in the 15th century.[1] The windows contain Royal heraldic stained glass from the latter part of the 15th century and from the Tudor period. In the tower is a stained-glass portrait believed to represent King Henry VII.[2] The tower has a ring of six bells,[3] five of which were cast in 1754.[1]

The church is missing its north aisle and transept, which were destroyed during the Civil War.[1] Gouging damage to the church door can be seen and is said to have been caused in an attack by Parliamentarian soldiers. There is a fine Renaissance style monument to the lord of the manor, Sir William Stonhouse (died 1632), sculpted by the well named Nicholas Stone. The canopy over the pulpit is said to have originally stood behind the Speaker's chair in the House of Commons and was given to the church by local man, Speaker William Lenthall, in 1643.[1] If this is so, it is the canopy from under which Oliver Cromwell's men dragged Lenthall at the end of the Long Parliament.

The former vicarage next to the church was built in the 15th century.[1] 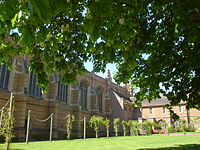 Abingdon Abbey held the manor of Radley until the dissolution of the monasteries in 1538. In the reign of Queen Elizabeth I, George Stonhouse built a house in Radley Park, but in 1727 the Stonhouse family replaced this with a new mansion, Radley Hall. Early in the 19th century the house was leased for a time as a Nonconformist school, and from 1847 it was leased to William Sewell who founded Saint Peter's College, Radley.[1] The school is now generally referred to as Radley College.[4]

In 1844 the Great Western Railway opened an extension from Didcot to Oxford, passing through Radley parish. In 1873 the GWR opened Radley railway station ½ mile south-west of the village, which still serves Radley.[5] 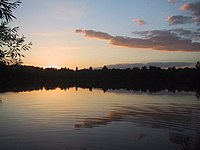 South of the village are current and former gravel pits. The disused pits have flooded, forming a number of lakes. In 1985 the Central Electricity Generating Board began filling some of these lakes with waste ash from Didcot Power Station. In June 2005 RWE npower applied for permission to fill in two more lakes. RWE npower soon withdrew Bullfield Lake from its proposal, but continued with its proposal for the larger Thrupp Lake. Local opposition formed into a protest campaign called Save Radley Lakes.[6] In December 2008 RWE npower finally announced that it "no longer needed" Thrupp Lake and withdrew its application.[7]

Radley has a Church of England primary school,[8] a post office,[9] a village hall[10] and a Women's Institute.[11] There is one public house, the Bowyer Arms.