Minch Moor is a hill amongst the Southern Uplands, its summit marking the border between Peeblesshire to the west and Selkirkshire to the east. It is amidst the woodlands two miles east of Traquair, from which it may be reached by a pleasant walk on well marked paths.

The summit stands at 1,860 feet above sea level and is the highest point of the Forestry Commission's planted woodland, the Elibank and Traquair Forest. Just below the summit is a spring known as the 'Cheese Well', from which trickles the Plore Burn, which runs north down the hill for barely two and a half miles before falling into the River Tweed. Several other brooks off these slopes find their way to the famous river.

Two long-distance walking routes pass over the hill, sharing a path: the Southern Upland Way, passing from Wigtownshire to Berwickshire, and the Cross Borders Drove Road 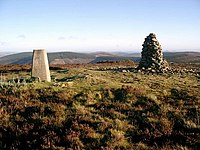 The summit of Minch Moor
Retrieved from "https://wikishire.co.uk/w/index.php?title=Minch_Moor&oldid=45279"
Categories: