Difference between revisions of "Marlow Bridge"

Marlow Bridge is a road traffic and foot bridge over the River Thames between the town of Marlow, Buckinghamshire and the village of Bisham in Berkshire. It crosses the Thames just upstream of Marlow Lock, on the reach to Temple Lock. The bridge is a Grade-I listed building.[1]

There has been a bridge on the site since the reign of King Edward III which was stated in around 1530 to have been of timber, though an original crossing to the Knights Templar of Bisham may date from 1309.[2] In 1642 this bridge was partly destroyed by a Parliamentarian army. In 1789 a new timber bridge was built by public subscription with a contribution from the Thames Navigation Commission to increase the headroom underneath.[2]

The current suspension bridge was designed by William Tierney Clark and was built between 1829 and 1832, replacing a wooden bridge further downstream which collapsed in 1828.[3][4] The Széchenyi Chain Bridge, spanning the River Danube in Budapest, was also designed by William Clark and it is a larger scale version of Marlow bridge. 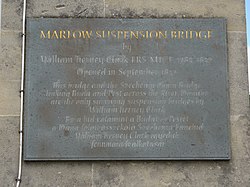 Commemorative plaque on the Marlow Bridge

In 1965 Marlow Bridge was faithfully restored.[1] The bridge has a 3-ton weight restriction and is used only by foot and local road traffic. Other traffic is carried by the Marlow By-pass Bridge.

On 24 September 2016 the bridge suffered 'potential structural damage' following an incident where 37-tonne Lithuanian haulage lorry exceeding the weight limit attempted to pass over the bridge.[5] The bridge was closed for two months to allow Buckinghamshire Council to undertake a series of stress tests on the suspension bridge hangers and pins, together with ultrasound and magnetic particle tests. No significant damage to the bridge was found, and had given the all-clear to reopen the bridge on Friday 25 November following restoration of sections exposed for weld testing with three coats of paint, removal of scaffolding surrounding the bridge's two towers, and reinstatement of timber work removed for inspection.[6] To the applause of around 100 onlookers, Marlow Bridge was reopened to traffic at 10am on Friday, 25 November, following a ribbon-cutting ceremony with Buckinghamshire Council Chairman Val Letheren, Marlow Town Mayor Bob Johnson,[7] Transport Cabinet Member Mark Shaw and local Councillors were first to drive across the reopened bridge following the ceremony.[8]