Knaresborough is an old and historic market town and spa town in the West Riding of Yorkshire. It stands on the River Nidd, four miles east of the centre of Harrogate.

Knaresborough is listed in the Domesday Book[1] as Chednaresburg and as Chenaresburg. Knaresborough Castle dates from Norman times;[2] around 1100, the town began to grow and provide a market and attract traders to service the castle. The present parish church, St John's, was established around this time. The earliest name for a Lord of Knaresborough is from around 1115 when Serlo de Burgh held the 'Honour of Knaresborough' from the King.[3]

Hugh de Morville was granted the Honour of Knaresborough in 1158. He was constable of Knaresborough and leader of the group of four knights who murdered Archbishop Thomas Beckett at Canterbury Cathedral on 29 December 1170. The four knights fled to Knaresborough and hid at the castle. Hugh de Morville forfeited the lands in 1173, not for his implication in the murder of Thomas Becket, but for "complicity in the rebellion of young Henry" (later Henry II), according to the Early Yorkshire Charters.

Although a market was first mentioned in 1206, the town was not granted a Royal Charter to hold a market until 1310, by Edward II. A market is still held every Wednesday in the market square. During Edward II's reign, the castle was occupied by rebels and the curtain walls were breached by a siege engine. Later, Scots invaders burned much of the town and the parish church. In 1328, as part of the marriage settlement, Queen Philippa was granted "the Castle, Town, Forest and Honour of Knaresborough" by Edward III and the parish church was restored. After her death in 1369, the Honour was granted by Edward to their younger son, John of Gaunt.

During the Civil War, following the Battle of Marston Moor in 1644, the castle was besieged by Parliamentary forces. The castle eventually fell and in 1646 an order was made by Parliament for its destruction (but not carried out until 1648). The destruction was mainly done by citizens looting the stone. Many town centre buildings are built of 'castle stone'.

The impressive Knaresborough House on the High Street is the home of Knaresborough Town Council and of The Yorkshire Federation of Young Farmers Clubs.[7] 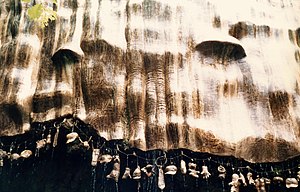 The Dropping Well in 1985, showing a selection of petrified toys 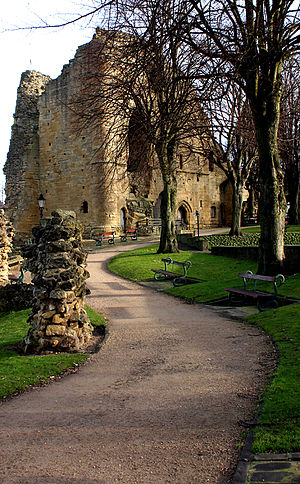 Sights in the town include:

Every year the town hosts a number of large social events, chief among them being the "Knaresborough Bed Race". Every summer since 1966, teams comprising six runners and one passenger, decorate special tube frame 'beds' for a parade through the town. Then, once the beds have been stripped of their non-essential decorations, they compete to push the bed on a race through the town. Although most teams are local, competitors often come from as far as Germany and the United States have taken part. The 2011 event attracted 25,000 people to the town.[8][9]

There is also a yearly arts festival, FEVA (Festival of Entertainment and Visual Arts), which has been running since 2001. This takes place in the summer in various parts of the town centre.[10]

The Borough Bailiff Pub is known to be the oldest pub in Knaresborough. It is currently under ownership of Samuel Smiths Brewery

The principal areas of public open space in the town are the Knaresborough Castle grounds, the nearby Bebra Gardens (formerly Moat Gardens) named after Knaresborough's German twin town, the Conyngham Hall grounds, Horseshoe Field, the King George V Playing Field]] and Jacob Smith Park, a broad parkland on the edge of the town bequeathed to Knaresborough by Miss Winifred Jacob Smith.