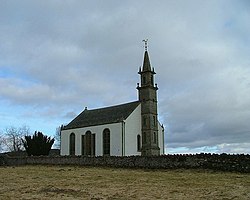 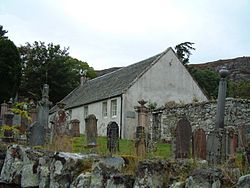 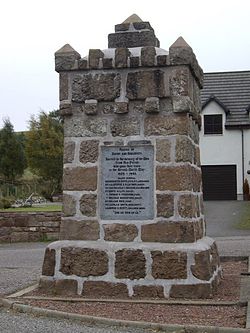 Daviot and Dunlichity is a united parish mainly in north-east Inverness-shire, but partly also in Nairnshire. The ancient parishes of Daviot and Dunlichity were united in 1618, but still are so far distinct as each to have their own church, that of Daviot standing near the Nairn's left bank, 6¾ miles south-east of Inverness, whilst that of Dunlichity stands a mile north-east of the foot of Loch Dundelchack and 6⅜ miles south-west of Daviot church. The united parish, then, is bounded north and north-east by Croy and Dalcross, south-east and south by Moy and Dalarossie, south-west by Boleskine and Abertarff, and north-west by Dores and Inverness and Bona. Its utmost length is 22⅜ miles from north-east to south-west; and its breadth varies between 4½ furlongs and 7¼ miles.

The River Nairn, rising towards the south of the parish, winds 22¼ miles north-north-westward and north-north-eastward, chiefly through the interior, but for the last 3⅜ miles along the Croy and Dalcross border; during this course it descends from 2,480 to close on 300 feet above sea-level. The southern Nairnshire section is drained to Loch Ness by the Farigaig, formed by two head-streams near Dunmaglass Lodge, and running two miles north-north-westward till it passes into Dores, Besides twenty-six tiny lakelets-eighteen of them dotted over Drummossie Muir-there are, in the interior, Lochs Coire (5 x 2¾ furl.; altitude, 865 feet) and Clachan (½ x ¼ mile; 683 feet), and, on the Dores border, Lochs Bunachton (½ x ¼ mile; 701 feet), Dundelchack (3⅜ miles x 1 mile; 702 feet), and Ruthven (9 x 2½ furl-; 700 feet)

To the right of the Nairn are:

To the left of the Nairn are:

Asterisks mark those summits that culminate on the borders of the parish.

Gneiss, granite, Old Red sandstone conglomerate, and black and blue bituminous shale are the chief rocks. Numerous low sand-hills, seemingly formed by flux and reflux of some great body of water, are on both sides of the Nairn, extending from Daviot Bridge, two miles higher up. Marl, to a depth of from five to six feet, formed an extensive bed in Tordarroch Moss, at a depth of from five to seven feet below the surface; and was largely and effectively used for improving the lighter arable lands. The soil, in some places, is light and sandy; in others, wet and spongy, on a clay bottom; in others, a black mossy humus; and in many, a compound of two or more of these. Daviot Castle, near Daviot House, was built in the beginning of the 15th century by David, Earl of Crawford; a square three-story structure, surmounted by round turrets at the angles, and girt by a wall enclosing an extensive area, and by a fosse with a drawbridge, it seems to have been a place of great strength, but is now represented by only fragmentary ruins. Dun-Daviot Hill, in the vicinity of the church, appears to have been used, in times of danger, as a signal station. Remains of ancient Caledonian stone circles are at Daviot, Gask, Farr, and Tordarroch; and several ancient tumuli on the hills have been found to contain funereal relics. Daviot House and Farr House both stand on the left bank of the Nairn.