Burton upon Trent, also known as Burton-on-Trent or simply Burton, is a large town standing across the River Trent in the east of Staffordshire.

Burton is best known for brewing, part of the town's heritage for several centuries. It was home to over a dozen breweries in its heyday.[1]

The town originally grew up around Burton-on-Trent Abbey, the monastery of St Modwen, and had grown into a busy market town by the early modern period. While Burton's great bridge over the Trent was in poor repair by the early 16th century it served as a comen passage to and fro many countries to the grett releff and comfort of travellyng people, according to the abbot.[2] The town had an estimated population of 64,449 as at the 2001 Census.[3] It lies within the National Forest.

The breweries came to Burton for the quality of the local water, which contains a high proportion of dissolved salts, predominantly caused by the gypsum in the surrounding hills. This allowed a greater proportion of hops, a natural preservative, to be included in the beer, thereby allowing the beer to be shipped further afield. Much of the open land within and around the town is protected from chemical treatment to help preserve this water quality.

The town is currently home to five brewers:

It is also the corporate headquarters of the pub operator Punch Taverns plc, which was spun out of Bass in 1997.

In addition, the White Shield micro-brewery remains open alongside the former Coors Visitor Centre (previously the Bass Museum of Brewing).

A by-product of the brewing industry is the presence of the famous British icon Marmite factory in the town. This in turn generated the production of Bovril. Both owned by multinational Unilever

The opening of the River Trent Navigation at the beginning of the 18th century allowed Burton beer to be shipped to Hull, and on to the Baltic Sea and Prussia, as well as to London where it was being sold in 1712. A number of breweries opened in the second half of the 18th century to take advantage of this trade. The Napoleonic blockade brought this to a halt, leading to some consolidation and a redirection of the trade to London and Lancashire via canals. When Burton brewers succeeded in replicating the pale ale produced in London, the advantage of the water's qualities allowed the development of the trade of Burton India Pale Ale (an ale specially brewed to keep during the long sea voyage to India). The building of rail links to Liverpool enabled brewers to export their beer throughout the British Empire.

Burton came to dominate this trade, and at its height one quarter of all beer sold in Britain was produced here. In the second half of the 19th century there was a growth in native breweries, supplemented by outside brewing companies moving into the town so that over 30 breweries were recorded in 1880.[4] However at the beginning of the 20th century there was a slump in beer sales causing many breweries to fail. This time no new markets were found and so the breweries shrank by closure and consolidation from 20 in 1900 to 8 in 1928. A further process of mergers and buy-outs resulted in three main breweries remaining by 1980: Bass, Ind Coope and Marston's. Today, only Burton Bridge Brewery remains as an independent brewer.

The town's connection with the brewing industry is celebrated by a sculpture of the Burton Cooper, which is now housed in the Cooper Square shopping centre.

The National Brewery Centre (previously Coors Visitor Centre & the Museum of Brewing and before that the Bass Museum of Brewing) which celebrates the town's brewing heritage is its biggest tourist attraction. 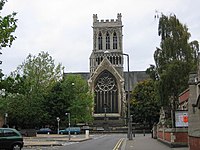 The main venue for live theatre and other performing and visual arts is The Brewhouse[5] which is run by the local council.[6]

The Burton Operatic Society has existed since 1951 and is still flourishing.

Burton upon Trent was also home to the Burton School of Speech and Drama on Guild Street where many professional and hard-working amateur actors and actresses learned their craft. Following the closure of the school in July 1984, its in-house amateur company the Little Theatre Players continued life as an independent amateur drama company called The Little Theatre Company often referred to locally and by its 70+ members as LTC. LTC currently stages at least four productions a year in the town: two plays, a musical and a youth production.

Burton upon Trent has one of the oldest amateur radio clubs in the UK. It was formed in 1919, although there were enthusiasts of wireless telegraphy in Burton well before the First World War. One of the founder members of the club was Mr F V A Smith, call sign XSR, (X = experimental station). Mr Smith was licensed on 3 July 1914. One month later he received a message from the Marconi spark transmitter at Poldhu in Cornwall, being sent to London, on the eve of the outbreak of World War One. The message, which has survived and is in the present club archives, was announcing the mobilisation of Russian, French and Belgian troops.

Claymills Pumping Station on the north side of Burton is a restored Victorian sewage pumping station, adjacent to the modern sewage works.

Until 2006, one of Burton's most distinguishable landmarks was the Drakelow Power Station, just south of Burton on the opposite side of the River Trent. The cooling towers have since been demolished.

References to Burton in popular culture appear always to refer to its breweries. For example, in the poem "Terence, this is stupid stuff" from AE Housman's A Shropshire Lad, the speaker asks the rhetorical question, "Say, for what were hop-yards meant, / Or why was Burton built on Trent?".

The expression "Gone for a Burton" became well known as an airman's expression for "shot down". There reference is a grim euphemism, as if the downed pilot has merely gone out for a beer.