Poldhu is a small area in southern Cornwall on the Lizard, where one may find the sand beach at Poldhu Cove and Poldhu Point overlooking it.

Poldhu Cove has a broad, sandy beach popular with holidaymakers.

Poldhu lies on the coast west of Goonhilly Downs, with Mullion a mile and half to the south and Porthleven five miles to the north. Poldhu means "black pool" in Cornish. The cove and point belong to the National Trust.

Aside from the beauty of the place, it has important place in the history of world telecommunications, as the site from which the first world's transatlantic radio message was sent and of later developments of the system.

The station's fifty-acre plot was bought in 1900 and construction work ran from October 1900 to January 1901, to a design by John Ambrose Fleming. The original 20-mast circular aerial[1] was destroyed in a storm on September 17, 1901.[2] For Marconi's experiments a temporary installation of two 200-foot masts was used.[3]

The transmitter[4] operated with a power of roughly 13 kW and a wavelength usually estimated at 170 metres. The original mast layout was not rebuilt, it was replaced with a four-mast design, 215 feet high and forming a 200-foot square.

Marconi later used the site for his shortwave experiments, with transmissions by Charles Samuel Franklin to Marconi on the yacht Elettra in the Cape Verde Islands in 1923 and in Beirut in 1924. The groundbreaking results of these experiments took the world by surprise and quickly resulted in his development of the Imperial Wireless Chain, the Beam Wireless Service for the British General Post Office. The service opened from the Bodmin Beam Station to Canada on 25 October, 1926, from the Tetney Beam Station to Australia on 8 April 1927, from the Bodmin Beam Station to South Africa on 5 July 1927, to India on 6 September 1927 and shortly afterwards to Argentina, Brazil and the United States. 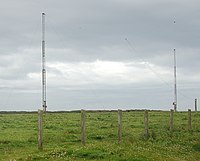 The station continued to operate until 1933. The site was cleared in 1935 and six acres were gifted to the National Trust in 1937 with the rest of the site added in 1960. The site has a stone monument pillar and a number of concrete foundations and earth structures also remain. In 2001 the Marconi Centre, a new museum/meeting building, was opened close to the site by the efforts of the Poldhu Amateur Radio Club, the National Trust and Marconi plc.

The more substantial building near the site, originally the Poldhu Hotel, built from 1899 to house the Marconi workers, is currently a care home.