Broxburn is a town in West Lothian, found 12 miles west of Edinburgh on the A8 road. It is some 5 miles from Edinburgh Airport, and to the north of Livingston.

As a commuter town serving the M8 corridor into Edinburgh and the industrial areas of Livingston, Broxburn has seen a recent increase in immigration, especially from Poland, broadening its cultural diversity.

The village that later became Broxburn probably originated around 1350 when Margery le Cheyne inherited the eastern half of the Barony of Strathbrock (Easter Strathbrock) on the death of her father, Sir Reginald le Cheyne III. The hamlet that grew up around her residence was then called Eastertoun after the land on which it stood. The lands of Strathbrock were earlier owned by Freskin the Fleming, granted to him under a charter from King David I of Scotland.

Eastertoun was burned to the ground at some time in 1443-4 during a conflict between William Douglas, Lieutenant-General of Scotland, and William Crichton, Chancellor of Scotland. It was destroyed again in 1455 during fighting between the Douglases and King James II of Scotland. After the conflict was resolved the village was gradually resettled.

The village was renamed Broxburn in 1600 by Sir Richard Cockburn of Clerkington, Keeper of the Privy Seal of Scotland, almost certainly after Broxburn, East Lothian, though interestingly today the East Lothiian Broxburn is little more than a hamlet while the village to which it lent its name has grown into a respectable town. 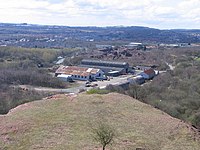 Broxburn remained an agricultural community until the development of the oil shale industry in the area during the second half of the nineteenth century. This brought in a rapid influx of workers, greatly expanding the local population. Broxburn is still known for its association with the industry, pioneered by the inventor and industrialist James Young. Many shale spoil tips, known as bings, are still in evidence around the town.

The Union Canal passes through Broxburn. It no longer operates as a transport link, but is now used for fishing and some leisure boating. It has a towpath previously used by the horses which drew canal barges and which is now used as a footpath.