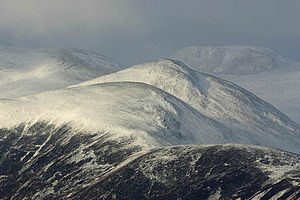 Breadalbane is a large district of Perthshire in the heart of the Highlands. It is bordered to the north by Atholl, on the east by Strathtay, and to the south by Strathearn and to the west by the Argyllshire districts of Argyll and Lorne.

The name of the district is Gaelic: Bràghad Albainn, meaning "the upper part of Alba (Pictland or Scotland)".

Loch Tay is the chief lake, and among the rivers are the Orchy, Dochart, Lochay, Lyon, Almond and the Tay (during the early part of its course). Population mostly centres in Aberfeldy, Fortingal, Kenmore and Killin.

The soil of Breadalbane is not cultivable excepting in some of the glens and straths. Game is plentiful, the lakes and rivers afford good sport, and the deer forests and shootings are valuable. The district has given the titles of earl and marquess to the Campbells of Glenorchy.

The Breadalbane hydro-electric power scheme lies within the region.

The Breadalbane Gathering is a popular 2/4 March tune for the Highland Great Bagpipe.

Much of Breadalbane is in the Loch Lomond and the Trossachs National Park. Ben More is the highest mountain in the national park.

The Breadalbane area of the National Park is subdivided into four communities, covered by the community council areas of Balquhidder, Killin, St Fillans, and Strathfillan.[1]