Alcester is an old market town in Warwickshire of Roman origin at the junction of the River Alne and River Arrow. It is close to the Worcestershire border, approximately 8 miles west of Stratford-upon-Avon, and 8 miles south of Redditch. The 2001 recorded a population of 6,214 in the town.

In Roman times Alcester (Alauna) was a walled town and Roman fort of some importance, standing at a junction between the Ryknild Street Roman road and the ancient Saltway from Droitwich and the Roman road from Stratford upon Avon and the Fosse Way.

An important market town, Alcester was the site of a Benedictine monastery founded in the middle of the 12th century by Ralph le Boteler.[1] The monastery was once a thriving one. In 1318 Walter de Beauchamp, who had a seat in the neighbourhood, complained to the abbot of the monastery that some of his monks had removed Beauchamp's possessions from his manor.[2]

At the Dissolution of the Monasteries, King Henry VIII granted the monastery to the Greville family.

The town today includes a number of preserved Tudor and other houses, notably those near the parish church, in Butter Street and in Malt Mill Lane. The Old Rectory, situated directly in front of the church, is a particularly interesting example of Georgian architecture. A number of fine Victorian additions have been made at the rear of the house. The clock on St Nicholas' church is in an unusual position on the south-west corner of the 14th century tower, making it visible from the main High Street. The church also houses the tomb of Fulke Greville, grandfather of Fulke Greville, 1st Baron Brooke.

The parish church, St Nicholas Church has a 14th-century tower, but otherwise the structure dates from the eighteenth century. It also underwent a Victorian restoration in about 1870.

The original church was founded in about 1100, and around 1140 it was given into possession of newly founded Alcester Abbey. During the Civil War, Parliamentarian soldiers turned the church into a barracks, stable and cookhouse and on 8 October 1644, a Royalist force set a fire to smoke the Parliamentarians out, which cannot have improved the state of the building.

In around 1720 the church was reported to be in a state of severe dilapidation and in 1729 it was rebuilt, leaving only the 14th century tower of the earlier church. It gains six bells in 1735. By 1871 the restorers had built a Gothic chancel, replacing the apse, and the huge three decker pulpit and galleries had been removed.

Severn Lamb, an engineering company specialising in the manufacture of transport systems for theme parks, resorts and similar venues, is based in Alcester. Amongst many other manufactures, they have built the old style steam trains used in many of Disney's parks, and the moving stage that encircled the perimeter of the arena for the opening and closing ceremonies of the 2004 Olympic Games in Athens.[3]

Alcester is known for two nearby local stately homes, Coughton Court, (a National Trust property) north at Coughton, and (south-west), Ragley Hall, the home of the Marquis of Hertford.

Kinwarton, which is just north of Alcester, contains a church of Anglo Saxon origin, and a historic dovecote — Kinwarton Dovecote — which again is owned by the National Trust.

Ragley Hall is home to the Jerwood Foundation's sculpture collection.

Alcester is also a significant town on the 100 mile-long "Heart of England Way" long-distance walking route.

Recent developments, made by the council, include 'Roman Alcester', a museum showing locally found artefacts from the 1st to 4th century AD. Admission is free although the museum is only open from Thursdays to Sundays. 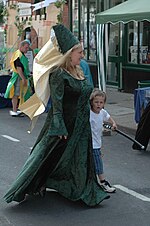 In early June Alcester holds the Court Leet charity street market with a procession and competitions for best stall and best fancy dress.

On the first Monday and Tuesday of October, Alcester plays host to an annual Mop Fair where amusement rides, side stalls and food booths line the High Street, Church Street and Henley Street. The mop fair has gradually over a period of years been decreasing in size. This is more likely to be an external influence as the people of Alcester still flock to the streets during the two nights.

The Alcester and Forest of Arden Food Festival is held every May and attracts thousands of visitors who enjoy local quality food and produce.

The rivers Arrow and Alne, which join on the outskirts of Alcester, occasionally flood and engulf part of the town, as they did in 1956, 1998 and on 21 July 2007. The rivers meet at Oversley Bridge, on the old Stratford road.