Worth Matravers is a village and parish in Dorset, situated on the cliffs west of Swanage. The village comprises limestone cottages and farm houses and is built around a pond, which is a regular feature on postcards of the Isle of Purbeck.

The civil parish stretches from the coast northwards to, and just beyond, the A351 road from Corfe Castle to Swanage. The village of Worth Matravers is situated on side roads towards the south of the parish, which also includes the village of Harman's Cross on the main road to the north.[1]

The cliffs of Worth Matravers were the site of a Chain Home radar station during World War II, which was instrumental in the development of radar when the Telecommunications Research Establishment outstation shared the site from 1940 until 1942 when it was relocated to Malvern, Worcestershire.[2]

To the south of Worth Matravers village are the limestone cliffs of the English Channel coast. These are situated on the South West Coast Path and are part of the Jurassic Coast World Heritage Site. This coastline is popular with tourists in the summer months, with the rocky beaches of Winspit, Seacombe and Chapman's Pool situated within walking distance of the village.

To the north of the village and parish are the chalk Purbeck Hills. Many tourists pass through this area on the Swanage Railway, a steam locomotive-operated heritage railway. Harman's Cross railway station on that railway is within the parish, but a significant distance from the village of Worth Matravers.

The parish includes the settlement of Harman's Cross to the north. In the 2011 census it had 285 households and a population of 638.[3] 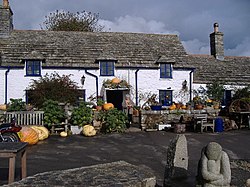 The Square and Compass

A monument on St Aldhelm's head, about a mile from the village, commemorates the development of radar by the Telecommunications Research Establishment at RAF Worth Matravers which was also one of the Chain Home radar stations during World War II, which proved decisive in the allied victory of that war. A Royal Observer Corps monitoring post is situated in the layby on the road to Worth Matravers.

About a mile from the village is Winspit, an old quarry on the cliffs. This was used as a filming location for an episode of Blake's 7 and also in two Doctor Who stories.

On the bluff of the headland is the Norman Saint Aldhelm's Chapel dedicated to St Aldhelm, Bishop of Sherborne.

The village is also well known for the Square and Compass, a Grade-II-listed public house, which has operated since 1793.[4] It is on the Campaign for Real Ale's National Inventory of Historic Pub Interiors.[5] It holds an annual week-long stone carving festival and accommodates a small museum exhibiting fossils and other local artefacts.