From Wikishire
(Redirected from Malvern)
Jump to: navigation, search

Great Malvern is a town in Worcestershire. It is the historical centre of the wider area of Malvern.

Great Malvern stands at the foot of the Malvern Hills, its steep streets running up the lower slopes. An 11th century priory was the origin of today's town, a priory which survived until the Dissolution of the Monasteries by Henry VIII and whose church survives, serving as the parish church. During the 19th century, Great Malvern became a popular centre for hydroptherapy and the townscape swelled to take in the villages of Barnards Green, Little Malvern, Malvern Link with Link Top, Malvern Wells, North Malvern, and West Malvern, and often referred to collectively - along with the hills - as The Malverns. 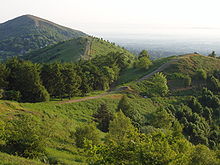 On the Malvern Hills

Great Malvern is stands 8 miles south-west of the city of Worcester, on the eastern slopes of the dramatic Malvern Hills. The altitude of the town ranges from about 160 to 660 feet above sea level as it scrambles up the hill slope. The River Severn runs roughly north-south 4 miles to the east. 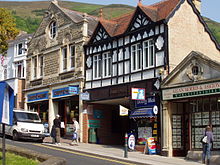 The Malvern Hills give the town a steep incline which can make moving around the town centre relatively difficult, particularly Church Street, one of the two main streets, and its parallel road Edith Walk, formerly a quiet unpaved lane that now provides access to car parks and the town centre's two large supermarkets. The other main street is the perpendicular Bellevue Terrace, a relatively flat extension of the Worcester Road.

Standing in the heart of the town is a statue of Edward Elgar, the composer, who lived in the town.

The Great Malvern Railway Station is a superb example of Victorian station architecture. The station, a listed building, is still a working station, on the Worcester to Hereford line. The waiting room has now been converted into a traditional tearoom. A private pedestrian tunnel (now derelict) was built into the station especially for the guests of the nearby Imperial Hotel, which was the town's largest during its heyday as a spa town and resort. In 1893 the building which housed the hotel became the Malvern Girls' College, now called Malvern St James School. 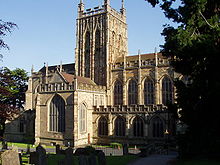 The large, magnificent priory and parish church of Malvern also occupies a large part of the very centre of the town with its main gate in Church Street. It dates from 1085, with extensions in the years between 1450 and 1500. 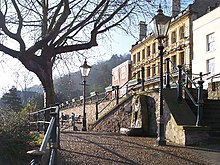 The Priory Park with its adjoining Malvern Splash pool and Winter Gardens occupies a large area in the centre of the town. The Winter Gardens complex is home to the Malvern Theatre, a leading provincial centre for dramatic arts[1], a cinema (movie theatre), a concert venue/banqueting room, bars and cafeterias.

For almost half a century, the Malvern Winter Gardens has also been a major regional venue for classical music, and concerts by legendary rock bands of the 60s, 70s and 80s. In 1998 a £7.2 million major redesign and refurbishment of the Winter Gardens complex took place with the help of contributions from The National Lottery Distribution Fund.

The Winter Gardens complex is the home of the Malvern Theatres. The first Malvern Drama Festival[2] was planned by Sir Barry Jackson and took place in 1929 and was dedicated to George Bernard Shaw. Many premiers of works by famous playwrights had their first performances at Malvern, including two by Shaw. In 1956, on the occasion of the dramatist's 100th birthday, Malvern held a Shaw centenary week. In February 1965 a Malvern Festival Theatre Trust was set up, and extensive refurbishment was undertaken. J B Priestley presided over the opening ceremony of the first summer season.

Great Malvern is the home of one of the oldest Fringe festivals in the world. The main events of the Malvern Fringe are the May Day and the annual three day festival held in June as a fringe to the Elgar Festival. These are accompanied by musical and other live events throughout the year.

The town is graced by many examples of Victorian and Edwardian villas and hotels. Many of the houses were built during the Industrial Revolution, and Malvern's boom years as a spa town, by wealthy families from the nearby Birmingham area. Many of the villas have since been converted to apartments, while some of the smaller hotels are now retirement homes.

Much architecture and statuary in the town centre is dedicated to Malvern water, including the St Ann's Well, which is housed in a building dating from 1815[3]. The drinking spout, Malvhina, by the sculptor Rose Garrard, was unveiled on 4 September 1998. The Enigma Fountain, also by Garrard, was unveiled by Prince Andrew in 2000.

The Malvern water became famous for containing "nothing at all". It was the main reason for Malvern's becoming a spa town and has formed a part of both local and national culture since Queen Elizabeth I made a point of drinking it in public in the 16th century, and Queen Victoria refused to travel without it. It is the only bottled water used by Queen Elizabeth II, which she takes on her travels around the world[4]. Millions of litres of Malvern water are bottled annually by Schweppes in a factory near Malvern and distributed worldwide.