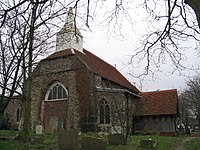 St Mary's Church is at the south end of the village. A church in the village is recorded in the Domesday Book of 1086.

The village is named from the De Ferrers family, landowners hereabouts. The Domesday Book of 1086 records that Udeham was held by Henry de Ferrers. It had a mill, 28 cattle, 15 cobs, 300 sheep, 100 pigs and 35 goats. A hermitage stood here during the reign of King Henry II. In 1175 the solitary hermit’s house was replaced by a priory named the name Woodham, whose lands took in 60 acres of forest stretching towards Danbury.[1]

By the beginning of the 16th century, there was a convent, which turned over for use as hospital until being returned to the church in by Edward VI in 1540.[1]

Edwins Hall in the village is the remaining part of a much larger late 16th century moated house, said to have been built by Edwin Sandys, Archbishop of York, and here his wife lived after his death.[2]

Due to the proximity of both the Marconi Company and North Weald Airfield, Woodham Ferrers was in the flight path for a number of air-raids during Second World War; though it was not a direct target itself.[3]

The village was the centre of national media attention in July 2011 when some 4,000 gypsies arrived at Woodham Ferrers at the time of the Christian Light and Life Festival nearby. Clearly not within the spirit of a Christian festival, the gypsies committed vandalism and dumped litter; local crime doubled and an extra 40 police officers were put on patrol to deal with it.[4]

This Essex article is a stub: help to improve Wikishire by building it up.
Retrieved from "https://wikishire.co.uk/w/index.php?title=Woodham_Ferrers&oldid=10788"
Categories: