From Wikishire
(Redirected from Danbury, Essex)
Jump to: navigation, search

Danbury is a village and parish in the Chelmsford hundred of Essex. It is located six miles south-east of Chelmsford and 33½ miles north-east of Charing Cross, London on a hill 367 ft above sea level. The civil parish had a population of 5,087 as of the 2011 census.

The village was built on the site of a Neolithic or early Iron Age hill fort noted for its oval shape, sometimes confused with the Megalithic enclosure at Danebury in Hampshire.[1]

According to the official parish publication, Danbury Parish Plan 2003, first Iron Age settlers, then the Romans and finally the Dæningas tribe of Saxons occupied the Danbury area.

The place-name 'Danbury' is first attested as Danengeberia in the Domesday Book of 1086. The name means 'the burgh or fort of Dene's people'.[2] The same name is the origin of Dengie in Essex.

After the Norman Conquest, King William took the lands and settlement and granted it to Geoffrey de Mandeville, who was made Earl of Essex. 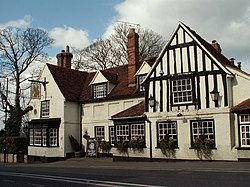 In mediæval times Danbury developed from two manors, St Cleres/Herons and Runsell. Traces of both still exist. There was also a small part of a third, now extinct, manor of Gibcracks. The church of St John the Baptist is the oldest building in the village, dating from the 13th century, and is grade I listed.[3] There is a local folk tale that the church's spire was damaged by the Devil in the guise of a monk in the year 1402. According to the legend, the Devil passed between the legs of a parishioner as he departed, and the man later died of a wasting disease.[4]

The village has a long connection with the Sinclair family, known locally as St Clere. There are three wooden effigies in the church which date back to the thirteenth and fourteenth century [3] One has been identified as being that of William St Clere. In 1968 it was taken to be exhibited at the Louvre in Paris.

In 1779 the tomb of a knight was disturbed, and the body therein was discovered to be perfectly preserved in what was described as "pickle", but this was contested by Joseph Strutt, MP for Maldon. Strutt also attempted to write a romance with a book called Queenhoo Hall. In 1808, Walter Scott was asked to complete the book by his publisher John Murray. Scott visited the village and stayed at the Griffin Inn in order to attempt his first venture into romantic fiction.

The church also contains some memorial slabs to the Mildmays. Sir Walter Mildmay was the founder of Emmanuel College, Cambridge and built Danbury Place in 1589. The original building has disappeared but another was built in 1832 in the Tudor Revival style, with red brick. It was acquired by the Church of England in 1845 and became a residence of the Bishop of Rochester. From then on it became known as Danbury Palace. The mansion sits within the historic landscape of Danbury Country Park, a former mediæval deer park, with later additions dating from the 18th and 19th centuries. The history of the park and garden was researched by Kate Felus in 2007.

The village is at the centre of extensive areas of woodland and heath owned by the National Trust and other conservation organisations. Danbury Common, a Site of Special Scientific Interest lies due south of the village centre. The woodlands extend into the parish of Little Baddow. However the quietude of the surrounding countryside contrasts with the A414 road, a major trunk route running through the village centre linking it with Maldon to the east and Chelmsford to the west. Several bus services running from Chelmsford link Danbury with Maldon, Great Baddow, Little Baddow, South Woodham Ferrers, Sandon and other villages around Maldon.

Danbury has its own community magazine called The Danbury Journal. It covers local issues, events and is a way for local businesses to advertise the services they provide. Printed and published by maypole press in South Woodham Ferrers, it is delivered to every house in Danbury, Bicknacre and Little Baddow.

Danbury Church Spire was the origin (meridian) for the 6 inch and 1:2500 Ordnance Survey maps of Huntingdonshire, Cambridgeshire, Norfolk and Suffolk. Originally it also was the origin for Essex, but that county was recalculated on the meridian of St Paul's, London, in about 1919, due to the fact that the metropolis started to spill out well into Essex.[5]