Wonders of the Peak 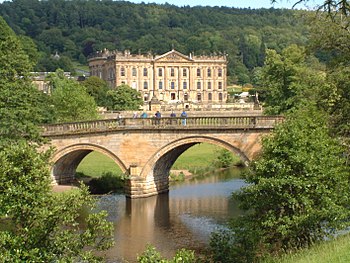 The Seven Wonders of the Peak were listed by the philosopher Thomas Hobbes, no less, in the seventeenth century, but following on from the eulogy by William Camden in the late Elizabethan and earlier Jacobean period. Within the Peak District of Derbyshire they are a set of natural wonders and one manmade, listed as:

William Camden wrote in his Britannia of six wonders:

- which he later translated into English as:

There are in High Peake wonders three,
A deepe hole, Cave, and Den,
Commodities as many bee,
Led, Grasse, and Sheepe in pen.
And Beauties three there are withall,
A Castle, Bath, Chatsworth.
With places more yet meet you shall
That are of meaner worth.

Thomas Hobbes, the founder of modern political philosophy, visited the Peak in the days of King Charles I, and wrote a lengthy poem, De Mirabilibus Pecci (published in 1636)[1] where he stated:

Charles Cotton popularised the idea in 1681, in his poem The Wonders of the Peake.[2]

By the time Daniel Defoe came to Derbyshire on his Tour Through the Whole Island of Great Britain between 1724 and 1726, the list of Wonders was well established. Defoe was entirely unimpressed with them though, apart from Chatsworth and the Eldon Hole.

Poole's Cavern is a show cave outside Castleton, admitted by its own guidebook to be in essence a 'damp hole in the ground' but displaying a portion of the wonders that are to be found beneath the fells of the Peak, hidden from the eye.

Charles Cotton's poem has it that:

So deep, and black, the very Thought does make

My brains turn giddy and my eyeballs ake.

Defoe was scathing. (Jayne Derbyshire wrote that ‘crawling on all fours through the notoriously narrow entrance into the dark, dank hole, seems to have put him in particularly bad humour.’)[3]

Now lit within, the contents of Cotton's Stygian deep are revealed in their glory: water-carved caverns with unearthly formations of stalactites and stalagmites described by the guidebook as ‘like an inspired meeting between Salvador Dali and Fred Flintstone’

The Crescent and St Ann's Well

St Anne's Well is the main well in Buxton, the 'capital' of the Peak. It has been known and celebrated locally since time immemorial, and become in the 19th century the centre of Buxton's flowering as a fashionable spa resort. The waters emerge at a steady 28°C and have been held to have healing properties.

Hither the sick, the lame and the Barren come

The Devil's Arse is a capacious cave near Castleton now opened as a show cave, though its ancient name was hastily changed for a visit by Queen Victoria, to "Peak Cavern". At 100 feet wide and 60 feet high, it has the largest natural cave entrance in Britain and the second largest in the world.

Though Defoe was unimpressed, possibly after a hard trudge over the moor to be faced with a dark cave, it is now a popular tourist attraction (under its polite Victorian name). Illuminated by the modern art of man its capacious vault is displayed in all its wonder. The village built in the mouth of the vault, recorded by Defoe, has long since gone however: the last cavemen left in 1915 and their dwellings were soon removed.

Other caves in the peak are open to visitors too today apart from Poole's cavern and the 'Peak Cavern', including the Blue John Cavern, Speedwell Cavern and Treak Cliff Cavern.

Charles Cotton's description is hardly to be bettered:

Whose sight may well astonish the most brave 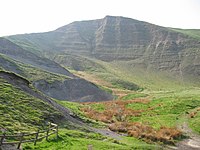 Mam Tor is a prominent hill near Castleton, a little to the south too of Edale where the Pennine Way begins.

Overlooking Castleton, Mam Tor at 1,696 feet is an imposing presence. Defoe was told that the name is derived from the belief that the hill is mother to surrounding, smaller hills, rounded like herself, shedding rock to make up new hills. It is more likely that the name (whether from Old English or Old Welsh) is from its pleasing breast-like shape. The ridge of the hill is though a crumbling mixture of strata of shale and gritstone, prone to rock-slides, which might have given rise to the "hill mother" idea.. 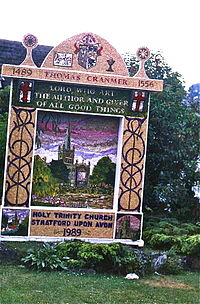 The Ebbing and Flowing Well is found at Tideswell, a village named after the well: Defoe records the well itself as ‘Tidewell’. It is to be found sitting in the front garden of a private house.

The wonder claimed for this little well is that, though far from the sea, its waters ebb and flow with the tide. Charles Cotton saw the spring ‘swell and boil up’, and become ‘a little torrent’, and Hobbes observed likewise.

Defoe was scathing about this spring and its miraculous 'tidal' behaviour, describing it as "A poor thing indeed to make a wonder of", and realised that the strange effects seen within it came from air being blown through underground passages.

Today, the well no longer ebbs and flows: this behaviour ceased from 1790.

(Gerald of Wales reports a well that ebbs and flows with the tide in Connaught, usually identified as Tullaghan Well in County Sligo, and another beside Dinevor in Carmarthenshire.)[4] 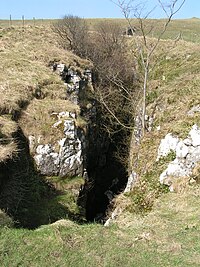 Eldon Hole is a chasm in the earth in the side of Eldon Hill, above Peak Forest Village. It is 100 feet long and 20 feet wide and long had a reputation for being bottomless. This is one of the only two Wonders of the Peak which Defoe believed worthy of the name.

Cotton wrote of the Eldon Hole:

A gulf wide, steep, black, and a dreadful one

Which few, that comes to see it, dare come near

Hobbes described how the Earl of Leicester lowered a peasant into the abyss to a depth of 750 feet, and that the man was hauled up raving, and died eight days later without saying what he had seen. Defoe recorded that:

this opening goes directly down perpendicular into the earth, and perhaps to the centre; it may be about twenty foot over one way, and fifty or sixty the other; it has no bottom, that is to say, none that can yet be heard of. Mr. Cotton says, he let down eight hundred fathoms of line into it, and that the plummet drew still; so that, in a word, he sounded about a mile perpendicular; for as we call a mile 1760 yards, and 884 is above half, then doubtless eight hundred fathoms must be 1600 yards, which is near a mile.
—Daniel Defoe's Tour Through the Whole Island of Great Britain, 1726

Modern geologists have ruined the wonder by measuring the depth of the hole at just 245 feet, although it is acknowledged it has been part-filled by stones over the years, and potholers can descend deeper to chasms under the hill, which may render it bottomless in a manner of speaking. 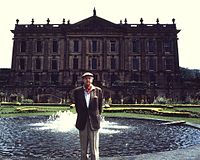 Chatsworth House is one of the greatest of the stately homes in Britain, and remains the seat of the Cavendish family, the Dukes of Devonshire, as it was in the days of Thomas Hobbes. The house itself, built by Bess of Hardwick and made yet more grandiose by the Dukes of Devonshire, is surrounded by 105 acres of garden and parkland, which received the expert attentions of Capability Brown in the 1750s.

Charles Cotton's ‘There stands a stately and stupendous pile’[2] barely does it justice.

For Daniel Defoe, Chatsworth was the greatest wonder of the Peak, and he described it at length – it was ‘a perfect beauty.’

Other sights about the Peak

Across the Peak District, the harsh beauty of the fells is contrasted with the lush loveliness of the dales. Beside the three caves that are found on the list, there are several others to be visited around Castleton and beyond: The Blue John Cavern for example is (with one neighbour) the only place on Earth from which the ornamental mineral bluejohn can be obtained. Speedwell Cavern and Treak Cliff Cavern present their own phantasmagoria.

For man-made sights, Peveril Castle which stands above the Devil's Arse, is one of the most dramatic Norman castles yet standing. In Youlgreave by utter contrast is Thimble Hall, a tiny one-up, one-down cottage which the Guinness Book of Records accepts as the smallest detached house in the world (10' 3" by 12' 2" and is 11' 10" high).