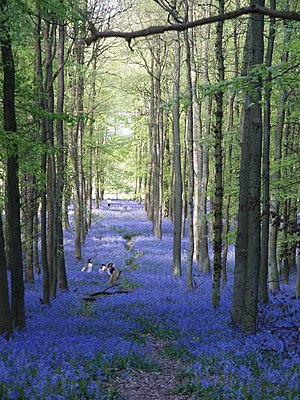 A bluebell wood in the forest

Whittlewood Forest in the south of Northamptonshire is a former mediæval hunting forest. There are tracts of ancient woodland within the forest, and old ditch boundaries can be found at the edges of several of the individual woods. The area has been the subject of extensive academic historical research.[1]

The core of the forest is between the villages of Silverstone, Syresham and Abthorpe extending south to the Northamptonshire-Buckinghamshire county border Interconnecting woods, made up in part by Hazelborough Wood, make up the main section. Isolated woods such as Bucknell Wood and a scattered collection east of the village of Whittlebury, stretching east to Potterspury make up the majority of the rest. Remnants exist all around the villages and over the county boundary into Buckinghamshire and Milton Keynes. Outliers include Whistley wood to the west of Syresham.

The forest is managed by the Forestry Commission, who also manage neighbouring woods such as Salcey Forest and Yardley Chase. Parts of the wood are protected as a 'site special of scientific interest', especially a number of separate copses which represent the remnants of the old Royal Forest. 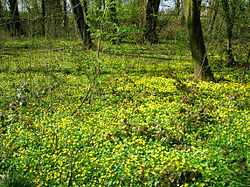 The wood springs alive with bluebells in the springtime in many parts of the forest. All throught there are other indicator species of ancient woodland, such as Yellow rattle and the Lesser celandine. There are stands of beech and oak interspersed with hazel coppice as well as conifer plantations within the forest. The conifer plantations are slowly being removed as a part of a national policy to restore ancient woodland. They will be replaced with native hardwoods such as oak and beech.

Many types of deer can be found in the forest, including red deer and roe deer as well as Muntjac. Foxes and badgers are common.

Birds include buzzards and there are occasional sightings of the Red kite, possibly from the expanding population in the Chilterns.

Broad view in the north-east of Bucknell Wood