Whitechapel is a town in Middlesex forming part of the East End of London. It is all contiguous with the metropolitan conurbation, roughly bounded by the Bishopsgate thoroughfare on the west, Brady Street and Cavell Street on the east and The Highway on the south. The residents of Whitechapel are of varied ethnic origin, primarily Bengali / Sylheti.

The town best known in the wider world for the infamous Jack the Ripper murders in the late 1880s, though there is a great deal more to Whitechapel than the misdeeds of a brief time. 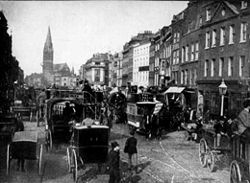 Whitechapel's heart is Whitechapel High Street, extending further east as Whitechapel Road, named after a small chapel of ease dedicated to St Mary. The church's earliest known rector was Hugh de Fulbourne in 1329. Around 1338 the chapel became the parish church of Whitechapel, called, for unknown reasons, St Mary Matfelon. The church was destroyed through enemy action in Second World War and its location and graveyard is now a public garden on the south side of the road.[1][2]

By the late 16th century the suburb of Whitechapel and the surrounding area had started becoming 'the other half' of London. Located east of Aldgate, outside the City Walls and beyond official controls, it attracted the less fragrant activities of the city, particularly tanneries, breweries, foundries (including the Whitechapel Bell Foundry which later cast Philadelphia's Liberty Bell and London's Big Ben) and slaughterhouses.

In 1680, the Rector of Whitechapel, the Rev Ralph Davenant, of the parish of St. Mary Matfellon, bequeathed a legacy for the education of forty boys and thirty girls of the parish – the Davenant Centre is still in existence although the Davenant Foundation School moved from Whitechapel to Loughton in 1966.

Population shifts from rural areas to London from the 17th century to the mid-19th century resulted in great numbers of more or less destitute people taking up residence amidst the industries and mercantile interests that had attracted them.

In 1797 the body of the sailor Richard Parker, hanged for his leading role in the Nore mutiny, was given a Christian burial at Whitechapel after his wife exhumed it from the unconsecrated burial ground to which it was originally consigned. Crowds gathered to see the body before it was buried.

By the 1840s Whitechapel, along with the enclaves of Wapping, Aldgate, Bethnal Green, Mile End, Limehouse, Bow, Bromley-by-Bow, Poplar, Shadwell and Stepney (collectively known today as "the East End"), had evolved, or devolved, into classic "Dickensian" London, with problems of poverty and overcrowding. Whitechapel Road itself was not particularly squalid through most of this period—it was the warrens of small dark streets branching from it that contained the greatest suffering, filth and danger, such as Dorset Street (now a private alley but once described as "the worst street in London"[4]), Thrawl Street, Berners Street (renamed Henriques Street), Wentworth Street and others.

William Booth began his Christian Revival Society, preaching the gospel in a tent, erected in the Friends Burial Ground, Thomas Street, Whitechapel, in 1865. Others joined his Christian Mission, and on 7 August 1878 the Salvation Army was formed at a meeting held at 272 Whitechapel Road.[5] A statue commemorates both his mission and his work in helping the poor.

In the Victorian era the basic population of poor country stock was swollen by immigrants, particularly Irishmen and Jewish immigrants from Germany and Russia. Writing of the period 1883–1884, Yiddish theatre actor Jacob Adler wrote, "The further we penetrated into this Whitechapel, the more our hearts sank. Was this London? Never in Russia, never later in the worst slums of New York, were we to see such poverty as in the London of the 1880s."[6] This endemic poverty drove many women to prostitution. In October 1888 the Metropolitan Police estimated that there were 1,200 prostitutes "of very low class" resident in Whitechapel and about 62 brothels.[7] Reference is specifically made to them in Charles Booth's Life and Labour of the People of London, specially to dwellings called Blackwall Buildings belonging to Blackwall Railway. Such prostitutes were numbered amongst the eleven Whitechapel Murders of 1888–91, some of which were committed by the legendary killer known as 'Jack the Ripper'. These attacks caused widespread terror in the district and throughout the country and drew the attention of social reformers to the squalor and vice of the area, even though these crimes remain unsolved today.[8] 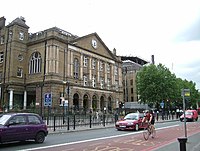 In 1902, American author Jack London, looking to write a counterpart to Jacob Riis's seminal book How the Other Half Lives, donned ragged clothes and boarded in Whitechapel, detailing his experiences in The People of the Abyss. Riis had recently documented the astoundingly bad conditions in large swaths of the leading city of the United States. London, a socialist, thought it worthwhile to explore conditions in the leading city of the nation that had invented modern capitalism. He concluded that English poverty was far rougher than the American variety. The juxtaposition of the poverty, homelessness, exploitive work conditions, prostitution, and infant mortality of Whitechapel and other East End locales with some of the greatest personal wealth the world has ever seen made it a focal point for leftist reformers and revolutionaries of all kinds, from George Bernard Shaw, whose Fabian Society met regularly in Whitechapel, to Vladimir Ilyich Lenin, who boarded and led rallies in Whitechapel during his exile from Russia. The area is still home to Freedom Press, the anarchist publishing house founded by Charlotte Wilson.

The "Elephant Man", Joseph Carey Merrick (1862–1890) became well known in Whitechapel — he was exhibited in a shop on the Whitechapel Road before being helped by Dr Frederick Treves (1853–1923) at the Royal London Hospital, opposite the actual shop. There is a museum in the hospital about his life.

Whitechapel remained poor (and colourful) through the first half of the 20th century, though somewhat less desperately so. It suffered great damage in the Blitz and from the German V-weapon attacks of Second World War. Since then, Whitechapel has lost most of its notoriety. 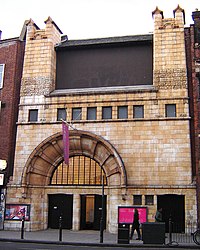 Whitechapel Road was the location of two 19th century theatres: 'The Effingham' (1834–1897) and 'The Pavilion' (1828–1935; building demolished in 1962). Charles Dickens, Jr (eldest child of Charles Dickens), in his 1879 book Dickens's Dictionary of London, described the Pavilion this way: "A large East-end theatre capable of holding considerably over 3,000 persons. Melodrama of a rough type, farce, pantomime, et cetera"[9] In the early 20th century it became the home of Yiddish theatre, catering to the large Jewish population of the area, and gave birth to the Anglo-Jewish 'Whitechapel Boys' avant-garde literary and artistic movement.

Since at least the 1970s, Whitechapel and other nearby parts of East London have figured prominently in London's art scene. Probably the area's most prominent art venue is the Whitechapel Art Gallery, founded in 1901 and long an outpost of high culture in a poor neighbourhood. As the neighbourhood has gentrified, it has gained citywide, and even international, visibility and support. From 2005 the gallery underwent a major expansion, with the support of £3.26 million from the Heritage Lottery Fund. The expanded facility opened in 2009.

Whitechapel in the early 21st century has figured prominently in London's punk rock/skuzz rock scene, with the main focal point for this scene being Whitechapel Factory and Rhythm Factory bar/restaurant/nightclub.

Home to centres such as London Action Resource Centre and rampART, Whitechapel is seen by many as a cultural hub for community based political activism particularly of an anti-authoritarian, anti-wartrend. The anarchist publishing house Freedom Press is nearby in Aldgate and one of the London chapters of Food Not Bombs serves regular meals in Altab Ali Park on Whitechapel High Street.

In the past Whitechapel has been home to such individuals as Rudolf Rocker (1873–1958), anarcho-syndicalist writer, historian and prominent activist who active in the area from 1895 to 1918. Charles Lahr (1885–1971), anarchist bookseller/publisher and secretary of Whitechapel branch of the Industrial Union of Direct Actionists (IUDA), was also a prominent figure resident in the area. Such individuals in history have helped form the culture of enthusiasm in political alternatives that is enjoyed in the community today.

The Sylhetis and Bengalis are the most visible migrant group today, and those from Bangladesh made up 52% of the Whitechapel ward total population in 2001, a number which may have increased. The East London Mosque at the end of Whitechapel Road is a major symbol of the resident Islamic community. The mosque group was established as early as 1910, and the demand for a mosque grew as the Sylheti community grew rapidly over the years. In 1985 this large, purpose built mosque with a dome and minaret was built in the heart of Whitechapel, attracting thousands of worshippers every week, and it was further expanded with the London Muslim Centre in 2004.[10] The Altab Ali Park near Adler Street was formerly a church site but was destroyed during the Blitz. It was given the name 'Altab Ali Park' in memory of a Bangladeshi clothing worker who was the victim of a racially motivated murder on 4 May 1978, and of other victims of racist attacks during the 1970s.[11][12]

A library, the Whitechapel Idea Store, constructed in 2005 at a cost of £12 million by William Verry to a design by David Adjaye, was nominated for the 2006 Stirling Prize.

Whitechapel features heavily in literature, rarely in a good light.

Whitechapel is used as a location in most Jack the Ripper fiction. One such example is the bizarre White Chappel Scarlet Tracings (1987) by Iain Sinclair.[13] It also features as the setting for the science fiction Webcomic FreakAngels, written by popular comics writer Warren Ellis.

In 2002, Whitechapel was used as the setting for a Sherlock Holmes film, The Case of the Whitechapel Vampire, based on the Arthur Conan Doyle story The Adventure of the Sussex Vampire. 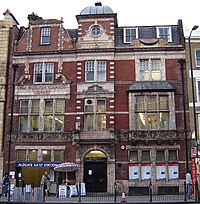 The East London line extension northwards to Highbury & Islington and southwards to West Croydon was completed in 2010. A further extension is planned in phase 2, to provide a complete rail ring route around south London to Clapham Junction, which is unlikely to be completed before 2015. Whitechapel is also scheduled to be a stop on the Crossrail project, for which preparatory works began in September 2010[14] at a large site excavating 'Cambridge Heath Shaft' (located at the eastern end of the Crossrail platform tunnels and adjacent to the junction of Whitechapel Road and Cambridge Heath Road, with Sainsbury's superstore and car park to the north-west of the site and The Blind Beggar public house immediately to the west).[15] This is now likely to be completed in 2017.

The nearest London Underground are both on the Hammersmith & City and District Lines:

Whitechapel station is also an interchange with the East London Line (London Overground) and is a proposed stop on Crossrail 1.

Whitechapel Market and the A11 corridor is currently the subject of a £20 million investment to improve the public spaces along the route. The London Boroughs of Tower Hamlets & Newham are working with English Heritage and Transport for London to refurbish the historic buildings at this location and improve the market. High Street 2012