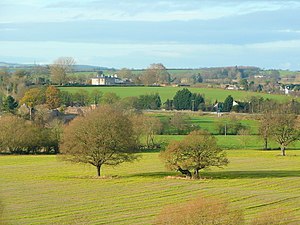 View westwards from Ross-on-Wye over Archenfield

Archenfield is a distinctive area of southern and western Herefordshire. Since the land was absorbed by the Mercians in the 8th century, it has stretched between the River Monnow and River Wye. Its origin is earlier though; Archenfield was once the larger Welsh kingdom of Ergyng.

The name 'Archenfield' is derived from the Welsh kingdom of Ergyng (or Ercic), which in turn shares a name with the Roman town of Ariconium at Weston under Penyard. In the Dark Ages, King Peibio and his descendants ruled the area, as recorded from about 555 until, in the middle of the 7th century, Onbraust of Ergyng married Meurig of Gwent and the two neighbouring kingdoms were combined. St Dubricius (known in Welsh as Dyfrig), a prince and bishop, was important in the sub-Roman establishment of the Christian church in the area. Ergyng eventually became a mere cantref .[1]

By the 8th century, the expanding power of Mercia led to conflict with the Welsh princesand by the beginning of the 9th century the western Mercians, who became known as the sub-kingdom of Magonsæte, had gained control over the area and nearby Hereford. During the rest of the century they moved its frontier southward to the banks of the Dore, the Worm Brook and a stream then known as the Taratur, annexing northern Ergyng. The sites of old British churches fell to Mercia. The rump of Ergyng then became known to the English as Ircingafeld; 'Field of the Ercyngs', which became "Archenfield".[2]

In 915, the area faced an incursion from a Vikings fleet sailing from the coast of Brittany; under two Jarls named Hroald and Ohtor they sailed up the Severn and seized Bishop Cyfeiliog of Llandaff who was here.[3] The Vikings were defeated in battle by the combined forces of Gloucester and Hereford, possibly at "Kill Dane Field" near Weston under Penyard.[4][5]

In the early 10th century, a document known as The Ordinance Concerning the Dunsæte records procedures for dealing with disputes between the English and the Welsh of Archenfield, who were known to the English as the Dunsæte or "hill people".[6] It stated that the English should only cross into the Welsh side, and vice versa, in the presence of an appointed man who had the responsibility of making sure that the foreigner was safely escorted back to the crossing point.[7]

Archenfield, which lay outside the hundred system, became a semi-autonomous Welsh district, or commote (or cwmwd), with its own customs.[8] Its administrative centre was at Kilpeck Castle. Its customs were described in a separate section of the Domesday Book account of Herefordshire. Domesday recorded that "King Gruffydd and Bleddyn laid this land waste before 1066; therefore what it was like at that time is not known". It also stated the Welsh of Archenfield were allowed to retain their old rights and privileges in return for forming an advance and rear guard when the King's army entered or left Wales. The local priests were required to "undertake the king's embassies into Wales". The exemption from services was mentioned again in 1250 and 1326, when it was stated: "The Frenchmen and Welshmen of Urchenesfeld hold their tenements in chief of our lord the King by socage, rendering 19 pounds 7 shillings and 6 pence. And they ought to find 49-foot-soldiers for our lord the King in Wales for 15 days at their own cost."[2]

The inhabitants of Archenfield thereafter retained their privileged position, living in a shadowy border land that was not really part of England nor Wales. Around 1404, Owain Glyndŵr and his troops raided the area. Glyndŵr himself may have died around 1416 at Kentchurch, within Archenfield, an area which he considered to be part of Wales.[5]

Uncertainty over the border persisted until the Laws in Wales Acts of 1535 and 1542 tidied up many of the administrative anomalies on the Marcher lands and Archenfield became the Hundred of Wormelow. However, it remained a predominantly Welsh speaking region until at least the 17th century, and the language was still spoken in the Kentchurch area as late as 1750.[5] The evidence of its Welsh history remains in many placenames and field names.[9]

In the later nineteenth century it was observed that:

'Archenfield was still Welsh enough in the time of Elizabeth for the bishop of Hereford to be made responsible together with the four Welsh bishops for the translation of the Bible and the Book of Common Prayer into Welsh. Welsh was still commonly spoken here in the first half of the nineteenth century, and we are told that churchwardens’ notices were put up in both Welsh and English until about 1860.'[10]

Many of the rights and customs of the people of Archenfield were maintained until comparatively recently. Men born in Archenfield had the right to take salmon from the River Wye until 1911.

In King's Caple, the only part of Archenfield east of the Wye, Domesday lists the inhabitants as one Frenchman and five Welshmen. Six local men paid the dues which had been owed at this time, and before, for centuries. Payment was still being made by one of these 'King's Men of Archenfield' in the 1960s.[2]

The towns of Ross-on-Wye and Hay-on-Wye lie within the bounds of the Archenfield region, and areas of or close to both towns today bear the name Archenfield. Additionally, one of Ross-on-Wye's most recognisable symbols; seen on numerous coats-of-arms, is the hedgehog, known in Middle English, and locally, as an "urchin", which echoes the name of Archenfield.