Whitchurch is a small town in Hampshire on the River Test, 12 miles north of Winchester and 7 miles from Andover. Much of the town is a Conservation Area. Because of the amount of wildlife in and near the river, parts of the town are designated as Site of Special Scientific Interest.

It is a small but confident Hampshire town, climbing up the hill to one side and dropping down to the River Test by the town's heart, and it is on the river that the town had its origins. The Test at Whitchurch is far from the vast waterway which it becomes at Southampton but is instead a modest country river, driving the mill which was a key to the fortunes of Whitchurch in past days. 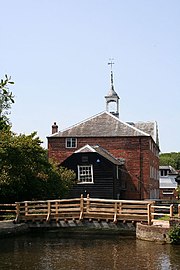 The Domesday Book of 1086 records that Whitchurch had four mills and throughout later ages new watermills were built to harness the current of the River Test.

The Silk Mill is the last of the mills which the Test once turned in Whitchurch, and its most famous. It was built in 1815 on a plot of land called Frog Island and though it was a latecomer amongst the town's mills, it is thought likely to stand on the same site as one of the four mills of the Domesday Book. Originally it was a fulling mill, but during the 1830s the mill was bought by the Hide family, who changed its operation to the weaving of silk.

The mill is kept as a working watermill but it is run as a heritage asset today and the building is now owned by the Hampshire Buildings Preservation Trust and leased to a dedicated trust to ensure the preservation of the historic mill and to keep it turning. 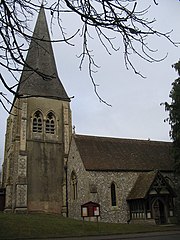 The Saxon church which once stood here was the original "white church" from which the town was named because it was built of limestone or chalk. The church and all its property were given by Henry de Blois in 1132 to St Cross Hospital in Winchester and the gift was confirmed by Richard I in 1189.

Little is known about the earlier structure because its Norman lords built a more imposing successor which is the basis of the present parish church of All Hallows. The first stage was completed in about 1190 when the three western bays on the south side of the nave were added. A north aisle was added in the 15th century. The tower was re-built in 1716 but still features the original oak stair turret. The whole church was largely re-built in 1866 and the square Norman tower was capped by a Gothic Revival spire.[1]

The church is a Grade 2* Listed Building and is the oldest remaining structure in the town. All Hallows is also widely known for its 3-manual pipe organ with 41 stops dating from 1935, and a peal of 10 bells in the tower. The earliest of the six bells in the tower is of 15th century origin and the others were gifts made in the 17th and 18th centuries. The bells were cast in a field belonging to a farm in Wood Street, now called Bell Street. The spire of All Hallows weighs 500 tons and is held in place by its own weight. 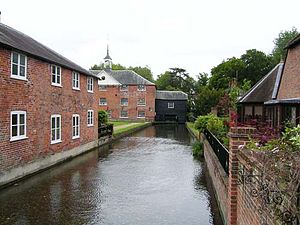 Along the River Test towards the Silk Mill

The name is Old English in origin, and means 'white church', although there is evidence of much earlier occupation by the river; archaeological excavations have uncovered Roman and Iron Age pottery, tools and skeletal remains.

The earliest written record of Whitchurch dates from the year 909 in a charter by which King Edward the Elder confirmed the manor of Whitchurch to the monks of Winchester as England recovered from the Viking onslaught of the previous fifty years. It next appears in the Domesday Book of 1086. This records the name as 'Witcerce', occupying 6,100 acres in the 'hundred of Evingar' and also records that Witcerce was held by the monks at Winchester.

By 1241 Witcherche was becoming prosperous, holding a market on Mondays in the market place. This was a vital feature of mediæval society, and produce such as butter, eggs, fruit and livestock were brought in for sale from the outlying farms and villages.

Witcherche received a royal charter in 1285, having become a borough in 1284. The land ownership had by now passed to a form of tenure known as a burgage. As a borough, it was governed by a Court Leet. Meetings were held in the village hall each year, in October, to elect a mayor and a council from among the burgesses. Whitchurch's prosperity was again on the rise due to its widespread sheep farming, the wool being a valuable commodity at the time.

The River Test provided the power for at least four watermills, located every half mile along the river through the town. The Town Mill was the source of power for milling corn, and other mills were used for finishing wool, weaving silk and dressing cloth.

Only Whitchurch Silk Mill survives, the others having been converted into residential dwellings. The Silk Mill is still operating as a working mill and popular visitor attraction. 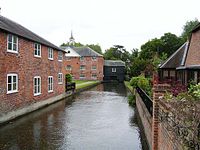 During the 16th century, under the reign of Elizabeth the town had become large and prosperous enough to send its first two members to Parliament in 1586. Until 1832, it was known as a Rotten Borough, as the members were nominated by an absent landlord.

The town hall was built during the reign of Queen Anne.

In 1712, Henri de Portal, a Huguenot refugee from France, established a paper mill at Bere Mill in Whitchurch, producing exceptionally hard and close-textured paper. The quality of the paper was considered so high that within twelve years, Portal was supplying the Bank of England, a tradition that still continues. De Portal eventually became naturalised as a British subject and established a second mill at Laverstoke. In more recent times the business moved to neighbouring Overton, where it is still based today. He died in 1747, and is buried at All Hallows, Whitchurch.

In 1888, the Star newspaper reported:

Also in 1888, Charles Denning and Clara Thomas married in Lincoln. They set up home in Whitchurch, where Clara's father had purchased two houses for them in Newbury Street. Here Charles established a drapery business. It was also here that one of their children, Alfred Thompson or "Tom", grew up.

Tom became a barrister and later a High Court judge on the Western Circuit, where he made his mark and swiftly rose to became one of the most renowned judges in English legal history as Lord Denning, spending many years developing the law as Master of the Rolls. The house in Newbury Street is today marked with a commemorative plaque. Before returning to the Court of Appeal as Master of the Rolls, Tom Denning was a member of the Judicial Committee of the House of Lords, taking the title Baron Denning of Whitchurch. He never lost his distinctive Hampshire accent, and wrote lovingly of his family and his home town in the autobiographical The Family Story.

Towards the end of the 19th century, the Salvation Army and its open-air services were the dominant talking point. They maintained that they had a right to hold these services but were prosecuted for obstructing the highways and causing a disturbance. The conviction in 1889 of one group, and their subsequent treatment by the authorities, led to demonstrations. In October 1889, 5,000 Salvationists and 12 Salvation Army bands demonstrated in the Town Square at Whitchurch. They were charged with riot, unlawful assembly and rout, and the Salvationists applied for the case to be heard in the High Court of Justice. In July 1890 the court found in their favour and laid down the rules that the law allows the public the right to hold orderly public demonstrations; rules followed until the beginning of the 21st century, when Parliament decided it disliked public demonstrations. 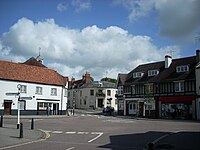 The population is 4,500. The town is a growing community with a combination of residential areas and some light industry, and serves as a small commuter town to London and to a lesser extent Basingstoke and Andover. Newbury and Winchester, whilst nearby cannot be reached by rail without significant detour and so commuting to these places is mostly by car. Lynch Hill Park, a small housing development, was used in a TV advert for Roysters crisps because of its "typical" American appearance. It also contains a house with an interesting roof line that is strangely pink. The centre of the town is a roundabout known as The Square. 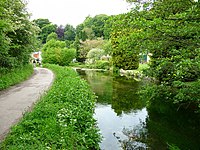 Positioned on the Southern edge of the North Wessex Downs as well as at the junction of several river valleys, Whitchurch has many opportunities for cycling, both strenuous and sedate, on-road and off. Popular cycle routes include over to the Bourne Valley, the Hampshire County Council Off-Road Mountainbike loop,[2] and down the Test Valley to Longparish.

For the more sedentary, an annual beer festival is held at the Longmeadow Sports and Social Club, run by the North Hampshire branch of the Campaign for Real Ale

Whitchurch was ranked first in the BT "Race to Infinity" competition that finished on 31 December 2010[3][4]. The win means that the local telephone exchange will be one of the first six rural exchanges to be upgraded to fibre-optic technology, to bring faster Internet speeds to residences, businesses, schools and doctors. The exchange serves the town, its surrounding villages and the rural communities in-between.

The Whitchurch Faster Broadband Campaign saw participation by many volunteers who went "door knocking" in the midst of a severe December snowstorm to secure the votes required to win. In the end, the final score was 104%, as many people without landlines or Internet access were able to cast their vote. In addition, the town also won £5,000 of computer equipment from BT for use by a community project[5].

The Whitchurch Association, a community charity, spearheaded the campaign and the collection of ideas for the community project.

Actually two days, the last full weekend in January, see the arrival in the town of around 2,000 keen gardeners from all over the southern counties searching for seed potatoes not available anywhere else in the country. The event boasts the largest selection of varieties available to amateur growers in one place in the world; in 2008 there were no fewer than 143.[6]