Dunstanburgh Castle stands on a headland on the coast of Northumberland, between the villages of Craster and Embleton.

The castle is the largest in Northumberland[1] and the site shows traces of much earlier occupation before the erection of the castle was started in 1313 by the Earl of Lancaster.[2]

Recent evidence suggests that the site of the castle was occupied in prehistoric times: however, the principal remains date from the 14th century.[3] In 1313, Earl Thomas of Lancaster, cousin of Edward II of England, began construction of a massive fortress. By the time of his execution in 1322, the castle was substantially complete. John of Gaunt improved the castle in the late 14th century as the Duke of Lancaster.

The castle did not play a significant part in the border warfare with Scotland that convulsed Northumberland and its neighbours for much of the Middle Ages. In the Wars of the Roses the castle was held for the Lancastrians in 1462 and 1464. The damage done was not made good and the castle fell steadily into decay. A report in 1538 mentioned it as being a "very reuynus howsse and of smalle strength" and another source in 1550 described it as in "wonderfull great decaye". It continued to deteriorate and was robbed of stone for the building of other places in the area.

The last private owner Sir Arthur Sutherland donated the castle to the Ministry of Works in 1929. The castle is now owned by the National Trust and in the care of English Heritage. It is a Scheduled Ancient Monument and a Grade I listed building. It lies within the Northumberland Coast Area of Outstanding Natural Beauty.

J M W Turner painted Dunstanburgh many times, usually rising at dawn to do so. One of his oil paintings of the subject is in the Dunedin Public Art Gallery. Another is in the National Gallery of Victoria. 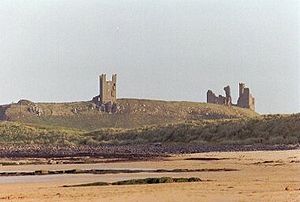 The castle occupies a prominent headland about a mile north of Craster. On the south side there is a gentle slope towards the castle. The northerly approach is much steeper and the northern perimeter juts into Embleton Bay forming a 150-foot cliff. The headland itself is part of the Great Whin Sill, a geological formation stretching across Northumberland.

There are signs of mediæval rig-and-furrow on the slopes near to the castle – possible evidence of subsistence farming for the castle inhabitants.

The present castle encloses the entire 11-acre headland. The southern approach is protected by a long enceinte wall punctuated by two rectangular towers (the Constable and Egyncleugh towers), two turrets and a large twin-towered gatehouse at the western corner. From the gatehouse, the wall carries northward along the hilltop to a rectangular turreted watch tower, known as the Lilburn Tower.

The twin-towered gatehouse served as the principal residential block of the castle. Under John of Gaunt, the gateway was blocked, and the entrance to the castle carried around to the left via a mantlet wall and tower, rendering the gatehouse a more secure traditional keep. The area at the rear of the twin-towered gatehouse was enclosed in a courtyard by walls and a tower to form an inner ward, with access on the east side. 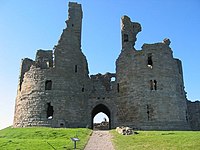 The remains of the massive gatehouse-keep

Composed of two tall D-shaped towers, the gatehouse-keep is a masterpiece of 14th-century castle design. Each tower was of four stories, and was originally capped by four turrets about 80 feet above ground level. The long gate passage was protected by gates at each end and two soldiers' barracks line the passage at ground level. On the first floor the gatehouse was divided into three rooms, with the central one controlling the portcullis mechanism. On the second floor above ground level there was a large room running across the entire width of the gatehouse, comprising a hall and chambers. The arrangements of the other stories and above have not survived.

The castle had a very high standard of masonry, comfort and design, and was likely intended to house Earl Thomas and his entire retinue. Well-lit residential chambers furnished with fireplaces may be found in the Lilburn and Constable towers as well as in the gatehouse. The large, apparently unused land in the middle of the castle may have served as a billeting area for troops.

Recent evidence suggests that there may have been an additional defensive enceinte of the castle, enclosing the low flat land around the foot of the main fort. Evidence has been found of a wall originating on the north near the Lilburn tower and extending around, anticlockwise, to the coastline on the east, where there may have been a mediæval port.