Westonzoyland is a village in Somerset, lying within the Somerset Levels, 4 miles southeast of Bridgwater.

Including the hamlet of Andersea, the parish has a population of approximately 1,600 and is the larger of the three 'Zoys', the others being the nearby Somerset villages of Middlezoy and Chedzoy.

There is one public house in the village: the Sedgemoor Inn, which has mediaeval origins and been the village pub since the time of the battle in 1685. It is a Grade II listed building.[1] 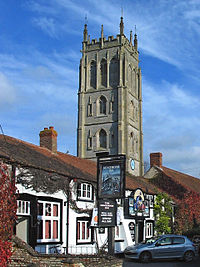 The northern edge of the village is King's Sedgemoor Drain, an artificial drainage channel completed in 1795, which diverts the River Cary and is used to help drain King's Sedgemoor.[2] A major upgrade of the drain occurred during the Second World War, when an explosives factory, ROF Bridgwater, was built at Puriton.[3] The drain was upgraded in 1972, as part of a £1.4 million scheme to construct a flood relief channel for the River Parrett. The 7½ embanked channel, called the Sowy River, runs from Monks Leaze Clyse below Langport to the King's Sedgemoor Drain near Westonzoyland Airfield.

To the south of the village is Langmead and Weston Level a 417.1 acre biological Site of Special Scientific Interest. It forms part of the nationally important grazing marsh and ditch systems of the Somerset Levels and Moors. The site is nationally important for its species-rich neutral grassland and the invertebrates found in the ditches and rhynes. The land lies in the flood plain of the River Parrett and many of the fields are poorly drained and seasonally water-logged. The terrestrial and aquatic invertebrates recorded on the site include four nationally rare species: the great silver diving beetle (Hydrophilus piceus), the soldier fly (Odontomyia ornata) and two true flies, Lonchoptera scutellata and Stenomicra cogani.[4]

St Mary's Parish Church stands in the village. It has a 15th-century carved timber roof. After the Battle of Sedgemoor in 1685, the church served as a prison for about 500 of Monmouth's soldiers taken after the battle.[5]

The four-stage tower has an embattled parapet with quatrefoil arcading, and set-back buttresses which terminate in pinnacles on the bell-chamber stage.[6]

The church contains a corner dedicated to the memory local airmen and other who served from Westonzoyland airfield and who lost their lives in 1918 and 1919 and after the World War II in the early 1950s. 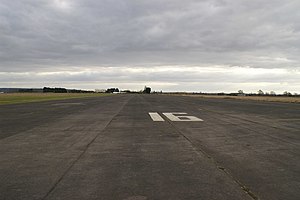 To the east of the village is the former RAF Weston Zoyland (1926–68), which was used for a variety of duties, including air combat and the transport of airborne ground troops to France during the Second World War.

The airfield now houses the Westonzoyland Microlight Aircraft Club - the 'Zoyboyz'. Microlight aircraft fly from the base for both recreation and as part of Sky Watch, a Civil Air Patrol, whose mission is "Keeping an eye out from the air for anyone in distress either on land or sea".

Hidden in the centre of the village are the workshops of Westonzoyland Carnival Club[7], referred to by its members as "The Shed". Formed in 1960 this is one of the oldest village clubs on the Somerset Carnival circuit. 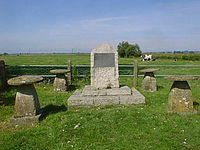 The Memorial to the Battle of Sedgemoor

In common with all the main villages of the Levels, Westonzoyland is built on an island of high ground that would once have been surrounded by wetlands in summer and floodwater in winter. Its name is taken from its location on the island of Sowy, the higher ground between the River Cary and the River Parrett.

Before the Reformation, the area around Westonzoyland belonged to Glastonbury Abbey which, during the 12th and 13th centuries, encouraged tenants to undertake large scale reclamation of the marshland.[10] 722 acres were enclosed in 1234.[11] At the dissolution of the Abbey in 1539, the land was divided up, the soil belonging to the Crown.

Cornelius Vermuyden was active in the region in the mid 17th century, building small-scale drainage schemes at Cossington, Catcott, Huntspill and Puriton, but despite the devastation caused by extensive flooding in 1607, he was unable to convince the communities of Sedgemoor of the benefits that a drainage scheme would bring, as they feared that improved pastures would prejudice their common rights.[12] Eventually a series of Acts of Parliament passed between 1777 and 1801 authorised the construction of drainage schemes in the Somerset moors and levels. 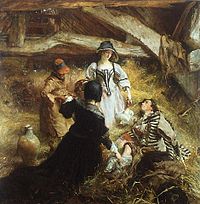 The Day at Sedgemoor by Edgar Bundy

The Monmouth Rebellion of 1685 came to a bloody conclusion at Westonzoyland. The rebellion was led by James Scott, 1st Duke of Monmouth, half-brother to King James II. After Monmouth's landing Lyme in Dorset there followed a series of skirmishes around south west England between the forces of and those of King James. On 6 July 1685, James's forces under Lord Grey of Warke brought Monmouth to battle on Sedgemoor near the Bussex area of Westonzoyland and wholly routed them. This, the Battle of Sedgemoor, was the last pitched battle in England.[13] 500 of Monmouth's men were captured and imprisoned in the church here before being taken off for trial.[14] A mural depicting the battle can be found on display in the unlikely setting of Sedgemoor motorway services on the North carriageway of the M5.

Westonzoyland is home to Somerset's earliest steam-powered pumping station, built in 1830. Once a guardian of the Somerset Levels, it is now a small museum displaying stationary steam engines and exhibits of land drainage history. Pride of place goes to the station's pumping engine, the Easton and Amos. It is still in the main engine house, built in 1861 to replace an earlier engine that had been carrying out pumping work since 1831.

In 1976, restoration of the site began, and in 1990 the site was bought from the owners, Wessex Water. The pump house has been Grade II* listed and is on the English Heritage "Buildings at Risk Register".[15].

Willow has been cut and used on the Levels since man moved into the area. Fragments of willow basket were found near the Glastonbury Lake Village, and it was also used in the construction of several Iron Age causeways.[16]

The willow was harvested using a traditional method of coppicing, whereby a tree would be cut back to the main stem. New shoots of willow, called "withies", would grow out of the trunk and these would be cut periodically for use.

During the 1930s over 9,000 acres of willow were being grown commercially on the Levels. Largely due to the displacement of baskets with plastic bags and cardboard boxes, the industry has severely declined since the 1950s. By the end of the 20th century only around 350 acres were grown commercially, near the villages of Burrowbridge, Westonzoyland and North Curry.[11]