Not to be confused with River Cary, Devon 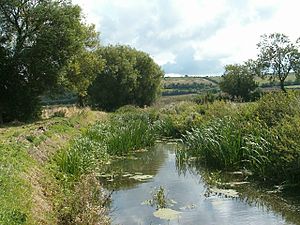 The River Cary at Somerton Door

The River Cary is a river in Somerset.

The River Cary has its source at Park Pond in Castle Cary, and then flows southwest through Cary Moor to Babcary (where its meadowsm at Babcary Meadows are designated a biological Site of Special Scientific Interest) and Cary Fitzpaine. It then flows northwest through Charlton Mackrell to the north of Somerton, passing under the Somerton Viaduct.

Around Somerton the river channel has been straightened and drains the surrounding wetland as it heads north to King's Sedgemoor.

In 1995 a major pollution incident occurred when lindane and mercury seed dressing were poured down a drain which leads into the river near Somerton.[2]

The river was the site of a study to examine the use of strategically placed floodplain woodland to alleviate downstream flooding.[3]