Westoning is a village in Bedfordshire half a mile from the edge of the town of Flitwick to the north. The village has many public footpaths through and beside the village's numerous farms that surround its centrally developed roads. The River Flit flows behind the Westoning stud farm.

The village's name appears as Weston (11th century), Weston Tregoz (early 14th century) and Weston Inge (14th century).[1] The suffix "Inge" is from William Inge, who was Chief Justice of the King's Bench in the reign of Edward II, and owner of the manor. 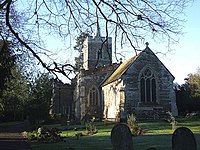 The parish church is St Mary Magdalene. It was built in the early 1300s, but there is evidence of previous churches on this site. It has stained glass windows of 1895 and 1903 and amongst its memorials is one to a Mr Inge (lord of the manor) who outlived 3 wives. 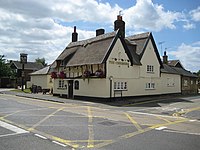 he Chequers, on Park Road 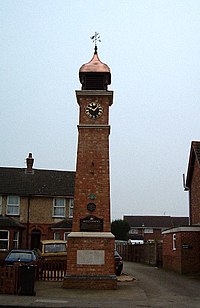 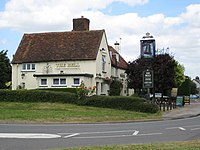 The Bell, on Greenfield Road

In the high street is the small joint Post Office and newsagent with a traditional village butcher's shop opposite. A children's park is fenced off from the rest of the recreation ground which provides various playground apparatus for young children.

The village has two public houses and a social club, Westoning Recreation Club (situated at the recreation ground on Greenfield Road). The pubs are The Chequers, a half-timber and thatch building of 18th-century date, and The Bell, an 18th-century brick and tile house that had its sign displayed from an old oak standing by the roadside. On Park Road and Greenfield Road respectively. At the top of Sampshill Road, Billington's Car Company have their storage area for stock. Flitvale Garden Centre is located just within the boundary on the road to Flitwick.

Major Coventry Campion, Lord of the Manor, had the Clock Tower built, of brick and stone, to mark the Golden Jubilee of Queen Victoria.[1] This was derelict for many years but was restored as part of the year 2000 millennium celebrations.

The recreational facilities include Westoning Football Club, Westoning Tennis Club and the club holds a regular village tournament between its members.

Westoning Recreation Club holds an annual event to serve as a fund raising event for the football, the tennis, its other sports and the Lower School. For the past few years this annual event has been a "Donkey Derby". The Recreation Club also holds real ale festivals twice a year, other events include a summer fête and church fête which are held within the recreation ground and vicarage grounds respectively. 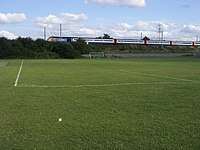 Westoning Lower School is situated in the heart in the village and is known for its many social occasions that include performances such as country dancing. Many performances are conducted at the village fair.

The village is described in the Domesday Book of 1086 men as having 16 villeins, 3 smallholders, 4 serfs. Cultivated land amounted to 14 ploughlands (land for) two lord's plough teams, five men's plough teams. Other resources were 2 ploughs of lord's lands (private parkland), seven ploughs of meadow and woodland worth 400 pigs (annual turnover of swine livestock).[2] The head manor was that of Hitchin whose owner was the King.

In 1173 the King granted the estate worth £15 per year to Roger de Sanford, and after his death the estates passed through a series of settlements and divisions. In 1299, two thirds of the manorial land much was purchased by William Inge, an influential man who served as Chief Justice of the King's Bench in the reign of Edward II. Inge enhanced his portion of the manor by gaining in 1303 a Royal Licence on his portion to hold a weekly market and annual fair. Five years later Inge acquired the remaining third of the Weston Manor.[1] It was from his ownership that the village changed from being 'Weston' to 'Westoning'.

By 1371 the lands and manorial rights passed to William la Zouche, son of Joan, daughter and heir of William Inge, Lords of the Manor of Eaton Bray. In 1525–6 a later William la Zouche died (having had 10 years when all lands were attainted and later gaining a reversal), during the Wars of the Roses.[1]

Aynells Manor was held in the 14th century by John Aynell from whom it passed through several gamily settlements until in 1541 it was granted to Gonville and Caius College, Cambridge.

Younges Manor, mostly in Westoning, is found mentioned for the first time in 1682, when it was held by Henrietta Wentworth, 6th Baroness Wentworth with her manor of Toddington. These lands descended with Toddington up to the beginning of the 19th century but all trace of it is lost after 1803.[1]

At the time of the Dissolution of the Monasteries, Woburn Abbey held lands in Westoning of the annual value of £2 18s. 2½d., but no further mention of the property has been found.[1]

Mention occurs of a water mill in an extent (survey document of the extent) of Westoning Manor made in 1297, and in 1322 two mills are found attached to the manor. Another extent dated fifty years later again mentions one mill, then worth nothing, and reference is found to it in a document as late as 1615. However no mills were in the parish in 1912[1] nor marked on today's maps.

Henry VIII summoned a later La Zouche as lord of the manor in 1533 to show on what (e.g. annual) service his ancestors held the manor. He proved that the manor was and always had been held of the king by great serjeanty, accordingly paid £4 for relief from the next services due. In 1542 the la Zouche family surrendered the estate to the Crown in exchange for a Royal estate in Derbyshire and Henry had it attached to the Royal Honour of Ampthill.

In the 17th century, John Bunyan, the early Baptist, who wrote The Pilgrim's Progress, lived here. He was arrested on 12 November 1660 shortly after the Restoration of the Monarchy for preaching privately in Lower Samsell in the village.

Westoning has varied soil on a subsoil of strong clay, which has been worked in a claypit, disused by 1912 at Westoning Wood End, for the manufacture of bricks. These works are in the south of the parish, close by the Midland Main Line.

On 11 September 1976, at 07:10am, a Texaco petrol tanker overturned in the High Street. The tanker subsequently caught fire and exploded, destroying eight houses. Twenty-one people were made homeless and over a hundred more were evacuated from their homes. Remarkably, nobody was injured in the blast but a number of fireman were hurt when their fire engine overturned on attending the scene. Eyewitness accounts state that petrol seeped into the surface water drainage system and cast iron inspection covers were blown into the air when the fire spread and ignited the petrol vapour in the drains.

The is a mediæval legend of Westoning, set in the 12th century, the tale of Ailward and Fulke. There may be various versions, but in essence it tells that Ailward was a farmer, who hired Fulke to plough his field for two pennies, but then refused to pay Fulke his due. One day during the feast of St Thomas, Fulke found Ailward drinking in the alehouse and demanded the money and when Ailward denied Fulke had done any work for him, Fulke suggested that he pay a penny, and the other penny should by drinks for all to celebrate the feast day, to roars of approval form the villagers. Instead, Ailward flew into a rage and went to Fulke's house where he broke in, threatened Fulkes family and seized a grindstone and a pair of gloves, on which tools Fulke's livelihood depended. After Ailward fell down drunk, the local beadle seized and bound him and brought him to trial.

It was a trial by ordeal; Ailward was sent to the ducking pond where he would be found guilty if the water rejected him and he floated, and innocent if he sank. Ailward floated and thus convicted he was sentenced to mutilation: one eye was put out his hands and feet cut off (or other extremities if other versions are followed) and he was left for dead by the roadside.

A stranger named Eilbrecht passed by and took pity on Ailward. He took him to his house near Bedford and began to pray. After days of praying, Ailward's eye and his hands and feet began to grow back. He devoted the rest of his years to St Thomas.[3][4]