The parish of West Wratting covers 3,543 acres; a thin strip less than two miles wide, stretching from the London to Newmarket road to the border with Suffolk. Much of its western border follows the Fleam Dyke. About it are other parishes of the same strip pattern; Weston Colville to the north and east, and by Balsham and West Wickham to the south.[1]

Listed as Wreattinge in the 10th century and Waratinge in the Domesday Book, the village's name means "Crosswort (or hellebore) place".[2]

A nonconfirmist chapel was built in around 1815, but numbers declined in the 1960s to the point of dereliction.[1] 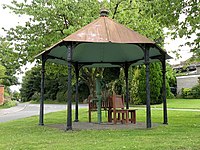 The village pump at West Wratting

The village is believed to have been formed as an offshoot of Great Wratting in Suffolk.[1] Land at the village is recorded in the Domesday Book as belonging to one Harduin de Scalers and the same family owned the land until it was granted by Stephen de Scalariis and his wife, Juliana, to the Convent of St Mary and St Radegund on the placement there of their daughter Sibil before 1161.[3] It houses a smock mill dated to 1726, the oldest confirmed in the country.[4][5]

Two 18th-century manor houses, West Wratting Hall and West Wratting Park, remain standing.[1] West Wratting Hall was home to Edward Purkis Frost, who built an unsuccessful ornithopter (a flapping-wing flying machine), powered by steam. Frost was president of the Aeronautical Society from 1908 to 1911, and a later version of his machine can be seen in the Shuttleworth Collection.[6]

Towards the end of Second World War an airbase was set up outside the village at RAF Wratting Common, and part of No. 195 Squadron RAF was based there flying Avro Lancasters. After the war, in the late 1940s, the base was used to host foreign displaced persons and workers in the Westward Ho! and North Sea scheme work programmes.[7]

Today the village houses one pub, the Chestnut Tree, which opened in the late 19th century.[8] There were three alehouses licensed in the village in 1632. The Crown Inn, opposite the church, recorded from 1788, was renamed The Lamb in the 20th century but closed at some point after 1975.[1]