Castle Camps is a village in Cambridgeshire, in the south-eastern corner of the county 15 miles south-east of Cambridge, and near to the borders of Suffolk and Essex. The Suffolk town of Haverhill lies close by.

Previously named Great Camps and Camps Green,[1] the village is named after Castle Camps, the castle within the parish's boundaries, half a mile or so to the southwest.

The parish lies in the very south-eastern corner of Cambridgeshire. Roughly triangular in shape, it covers an area of 3,198 acres. Its south-western and south-eastern borders separate it from Essex with the former following the line of the ancient woodland that separated the counties, and the latter probably representing the extent of the fence around the Castle. It also borders Shudy Camps to the north and has a short border with Bartlow to the north-west.[2]

The highest point in Cambridgeshire lies within the parish, outside the village of today on the site of the airfield and the abandoned mediæval village.

The village of today stands half a mile or so from its original location as the village serving the castle of the same name. The castle decayed and vanished and the old village with it. A farm stands there now, and the parish church too, isolated from its own village.

The hamlet of Olmstead in the south-eastern corner of the parish forms part of the ancient parish of Helions Bumpstead, otherwise in Essex, and remains part of its ecclesiastical parish, though within Cambridgeshire.

The parish church, All Saints, stands at the old village site half a mile from today's Castle Camps. It is by the earthworks of the old castle and in front of Castle Farm.

There has been a church in Castle Camps since at least the start of the 12th century. The present parish church, dedicated to All Saints, has stood since the 15th century. It comprises a chancel, nave with south porch, and west tower. Situated to the north-west of the castle, the building largely dates from the 15th and 16th century, though elements of the chancel walls may have been built in the 14th century.[2]

The mediæval tower collapsed in 1850, with a replacement completed in 1851. Extensive refurbishment continued through the 19th century.

John Ernest Bode was rector of the parish in the mid-19th century, and is known for writing the hymn "O Jesus I have Promised". He is buried in the church yard.[3]

The village has one public house, The Cock, situated on the High Street. There were two alehouses licensed in Castle Camps in 1682, and in 1800 there were 2 pubs – The George, which closed around 1910, and The Cock. The New Inn opened prior to 1871 and close in the late 20th century.[2]

Castle Camps also has its own primary school, founded with a single schoolroom in 1866, when there were 96 pupils.[4]

A building was bought to become the village hall in 1952.[2]

Castle Camps was a Norman Castle in the parish. The site was originally an Anglo-Saxon manor, belonging to Wulfwin, a Thane of King Edward the Confessor. After the Norman invasion, William the Conqueror gave the manor to Aubrey de Vere I, ancestor to the Earls of Oxford. The castle remained in the de Vere family until 1584 when it was sold to Sir John Skinner, Lord Mayor of London. Roughly twenty five years later it was bought by Thomas Sutton, who endowed it to Charterhouse, which in turn sold all the Estate except Castle Farm and Manor in 1919. Between 1941 and 1945 a large part of the land of became an airfield.

The village was recorded in 1086 in the Domesday Book:

The Inquisitio Comitatus Cantabrigiensis, however, stated that there was

Aubrey de Vere I may have fortified the manor house or ordered a Motte-and-bailey castle constructed, although the castle could date from the twelfth century. In the later twelfth century it would have been the largest fortress in Cambridgeshire and was notable for its small bailey and the size of its motte, whose flat top covered just over an acre. There are records of work being carried out in the castle between 1265 and 1331, and it has been suggested that this could refer to the construction of the new bailey.

In the late 15th century, a four-story brick tower was attached to the castle. The brick tower remained until 1779 when it was blown down by a high wind. The manor house was rebuilt in the 16th century, but fell down in 1738. Part of the back wall was then used in the construction of a smaller farmhouse, called Castle Farm. Most of this wall still stands. About this time a sketch was made of the Castle by S H Buck, dated 1731.

No warfare was recorded here; though justices of the peace were driven away by force of arms in 1526, during quarrels between a dowager countess and the new earl.

The only remains of the Norman Castle which still exist above ground is a piece of rubble in the yard to the south of the present farmhouse and Earthworks. It is a Scheduled Monument. 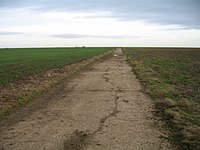 Central track of the airfield and the county top

During the Second World War, Castle Camps, like may other parts of East Anglia, was home to a RAF station built on the plateau to the south-east of the castle, lying across the boundary with Essex. The airfield was established in September 1939 as RAF Castle Camps and it operated as a satellite for RAF Debden and RAF North Weald. Numerous squadrons flew from the airfield until its closure in January 1946. The land was sold between 1963 and 1966.[6]

The pattern of the airfield is still clear on the ground; a concrete perimeter track runs around the field and a central concrete track now serving the farm runs in a straight line up the middle, along which a public footpath lies. The highest point in Cambridgeshire is here, at the peak of the central track.