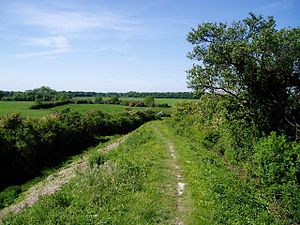 A section of Fleam Dyke near Fulbourn 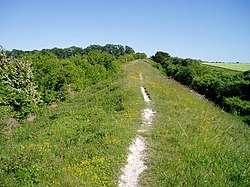 Fleam Dyke or Fleam Ditch is a long, defensive bank-and-ditch earthwork in south-eastern Cambridgeshire, generally assumed to have been dug in the Anglo-Saxon period as a defence for the Kingdom of East Anglia. The Flendish Hundred is named after it.

The main surviving section of the dyke consists of a massive bank and ditch running four miles between Fulbourn and Balsham, and this stretch divides the parishes of Fulbourn from Great Wilbraham, and Balsham from West Wratting, all four meeting at Mutlow Hill ("Moot hill Hill"), a large Bronze Age burial mound incorporated into the bank. There is also a section near Fen Ditton, or High Ditch; Fen Ditton acquired its name from the earthwork here; dic tun or "Ditch Village".

As a few potsherds of the early and late Bronze Age were found in the most eastern part of the dyke it seems that much older earthworks have been used. The archaeologist Professor McKenny Hughes therefore preferred to speak of 'multi-period dykes' while more recently Alison Taylor cautiously concluded that though most defensive dykes in Cambridgeshire have been shown to be Anglo-Saxon in their final phase, they often seem to be preceded by Iron Age works, and elsewhere in East Anglia they are commonly Iron Age in date.[1]

In the late 6th or early 7th century competition between neighbouring Saxon tribes was particularly fierce. It is believed that the dyke would have been used to demarcate the boundary of a tribe's influence as well as a barrier to the British tribes to the west. It is an East Anglian work, as the bank is on the eastern East Anglian, side and the deep ditch on the western side. The Devil's Dyke, a longer dyke parallel further east, is built in the same configuration.

At its creation, the chalk barrier ran from The Fens in the north-west to the clay woodlands in the south making circumvention difficult.[2] Findings such as the small quantity of silt in the ditch fills also suggest that the dyke fell into disuse soon after it was built.

The dyke is one of several earthworks in southern Cambridgeshire designed to control movement along the ancient Roman roads. The others include Devil's Dyke, Brent Ditch and Bran ditch.

Black Ditches, Cavenham is a fifth earthwork guarding the ancient Icknield Way and can be found in Suffolk just north-west of Bury St Edmunds. 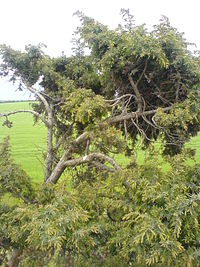 The course of the dyke is now controlled by English Heritage as a Scheduled Ancient Monument, as well as Site of Special Scientific Interest. A well-kept footpath runs the full length of the dyke.

The path is also home to several rare species of plants and is an excellent example of a chalk grassland. It is on a stretch of these open grassland banks south of the A11 that rare examples of the Common Juniper tree can be found