Wendron is a village in Cornwall, three miles north of Helston. The parish population at the 2011 census was 2,656.

Before 1284 Edmund, Earl of Cornwall, gave the church of Wendron, with its chapels, to Rewley Abbey near Oxford. Before this it had belonged to the earl's manor of Helston which included the whole parish. The church is cruciform but was enlarged in the 15th century and is of great interest.[1]

The holy well of St Wendrona is at Trelill and nearby was her chapel, licensed in 1427, about the same date as the well. At Merther Uny was a quasi-parochial chapel of St Uny with its own cemetery. At Degibma, on Loe Pool, was a chapel of St Degamanus. At Bodilly was a chapel of St Henry the Hermit (died 1120, feast day on 16 January).[2]

The Revd G. H. Doble served for almost twenty years as the vicar of Wendron (1925–1945). Langdon (1896) recorded the existence of eight stone crosses in the parish, including two at Merther Uny. The church of St Wendrona contains the brass of Warin Penhalluryk, rector of St Just, vicar of Wendron and Stithians, d. 1535.[3] 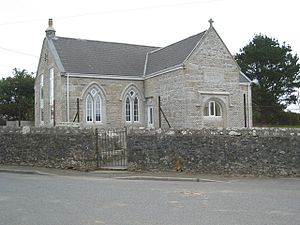 The historic parish of Wendron is in the Hundred of Kerrier; it was originally bounded by the parishes of Illogan, Gwennap, Stithians, Constantine, Mawgan-in-Meneage, Gunwalloe, Sithney and Crowan. The villages of Wendron Churchtown, Coverack Bridges, Lower Town, Trewennack, Gweek, Edgecumb, Menhay and Four Lanes were in the historic parish. In the 19th century this was an important tin-mining area and severe unemployment was caused when mining declined. In 1878 the landowner, Lord Robartes, tried to help the unemployed by bringing uncultivated land into production.[4]

The Long Stone on Prospidnick Hill is just to the east.