Porkellis is a village in Cornwall, approximately three and a half miles north-east of Helston. It is in the heart of the old Wendron mining district.

The village has a pub (The Star Inn), Methodist chapel, village hall and primary school. 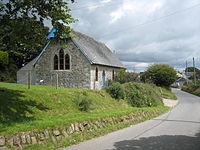 The village also had a church, St Christopher's, which was built in the 19th-century, and was a chapel of ease in the parish of Carnmenellis. It closed in the 1970s and is now used as the village hall.[2]

Porkellis Moor is an extensive area of marsh near the village, which was once used for mining, mainly for tin, and engine houses and other industrial buildings remain.[1] The Porkellis China Clay Works attempted to extract china clay, over a period of three years, spending approximately £3,000. However debts mounted and eventually the Sheriff of Cornwall exercised issued a writ of fieri facias and the goods of the company was sold, by auction for a small amount on 28 April 1879,[3]