Wells-next-the-Sea, known locally simply as Wells, is a tiny town and seaport on the north coast of Norfolk.

The civil parish has an area of 6 square miles and in the 2001 had a population of 2,451 in 1,205 households. It is within the "Norfolk Coast Area of Outstanding Natural Beauty".

Wells is about 15 miles east of the resort of Hunstanton, 20 miles west of Cromer, and 10 miles north of Fakenham. The county town, the City of Norwich, lies 32 miles to the southeast. Nearby villages include Blakeney (famous for its bird sanctuary and its seals), Burnham Market, Burnham Thorpe (the birthplace of Horatio Nelson), Holkham (with its famous stately home Holkham Hall), and Walsingham.

The name of the village is just as it seems: "well" or "spring" in the context. It is recorded as Guella in the Domesday Book; a form Latinised from the original Wella, a spring). There are indeed springs here, and Wells once had many well from which water was drawn, supplied by water rising through the chalk.

The town started to be known as Wells-next-the-Sea in the early 19th century to distinguish it from other places of the same name. When the Wells and Fakenham Railway was opened on 1 December 1857, the terminus was given the name of "Wells-on-Sea". In 1956 the Wells Urban District Council voted to (re-)adopt the name Wells-next-the-Sea, which has been considered official since then.[1]

The North Sea is now a mile from the town, as a result of the silting of the harbour. The Holkham Estate reclaimed hundreds of acres of saltmarsh northwest of Wells, completed by the construction of a mile-long sea-wall in 1859.[2] This reclamation reduced the tidal scour and is itself a further cause of silting. The town has long thrived as a seaport and is now also a seaside resort with a popular beach that can be reached on foot or by a narrow gauge railway that runs partway alongside the mile-long sea wall north of the harbour. The beach is known for its long flat terrain, abstract sand dunes, varied unique beach huts and a naturist area to the west at Holkham.

A land-locked brackish pool called Abraham's Bosom is used for pleasure boating and canoeing. The beach is backed by dense pine woods which are part of the Holkham National Nature Reserve. The woods comprise Scots pine, Maritime pine and Corsican Pine growing on sand.[3]

More pinewoods exist to the east of the beach over the shipping channel at an area called the East Hills. This can be accessed on foot at low tide though all of the tidal sands in the area are extremely dangerous due to the speed and currents of the rising tide. It is not advisable to cross the channel without detailed local knowledge.

The town stretches nearly a mile inland. The majority of shops and other such businesses are now found on Staithe Street but up to the 1960s commercial premises were also to be found along High Street which continues south towards St Nicholas's Church. The church burned after a lightning strike in 1879: the exterior shows the original stonework, but the interior is sparse and lacks interest. John Fryer, Captain Bligh's sailing master on HMS Bounty was born at Wells, and is buried in the churchyard.

The distinctive landmark of the seafront is the granary with its overhanging gantry on the quay, finished in 1904. This is now converted to flats. The maritime tradition of the town meant it used to have a remarkable number of public houses for a town of its size although many of these have since closed. The northern end of the town used to be notable for parallel "yards", narrow rows of cottages similar to the northern "ginnels", which could be relics of Danish occupation. These were largely lost in the terrible 1953 flood damage, and subsequent "slum clearance".

A feature of the town is the area known as The Buttlands, a large green ringed by lime trees. Large elegant Georgian houses overlook The Buttlands, as do the Crown Hotel, Globe Inn and the Wells Catholic Church. If you exit The Buttlands down the hill at its south-west corner you can see Ware Hall, which was rebuilt over a period of years from the 1970s by Miss May Savidge, who brought it in parts when she moved from Ware in Hertfordshire.[4] It was a significant port in the sixteenth century with 19 ships over 16 tons burden operating out of Wells in 1580, making it the major port in the area: the main trade was corn.[5] 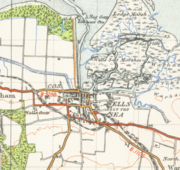 Towing a lifeboat to the lifeboat house

Formerly the town was served by [[Wells-on-Sea railway station and was connected to the national rail network by two lines. The line westwards towards King's Lynn was never reinstated after damage in the 1953 East Coast Floods, while the line to Norwich by way of Fakenham, Dereham and Wymondham was a victim of the "Beeching Axe" of the 1960s.

The Wells and Walsingham Light Railway, a 10¼ inch-gauge railway (the longest of such a gauge in the world), now uses part of the track-bed and has its own separate Wells railway station.[6]

The Wells Harbour Railway[7] is a separate 10¼ inch-gauge railway that takes passengers from the harbour behind the sea wall towards the beach and caravan site.

The Wells-next-the-Sea lifeboat station houses both an all-weather lifeboat and an inshore rescue boat, and stands at the harbour entrance. The old lifeboat house, now used as the harbour offices, is at the western end of the quay

In 1880, Wells was the scene of a grim lifeboat disaster in which 11 of the 13 lifeboat crew drowned, leaving 10 widows and 27 children without fathers. A memorial to the crew stands adjacent to the old lifeboat house.