Waterford is a village in Hertfordshire, standing by the River Beane, just a mile or so north of the county town, Hertford. It is found along the A119 road.

St Michael and All Angels was built in 1923. It is an excellent example of Victorian construction in the Early English Gothic style. It was financed by Robert Smith, owner of the Goldings estate close to the church. All wood used in constructing the church came from the Estate. The roof is lined with Broseley tiles and the bell tower and octagonal spire with cedar shingles. The porch is of oak construction 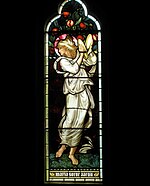 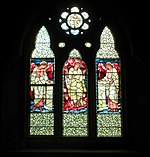 The church has 14 striking Pre-Raphaelite stained-glass windows from the Morris & Co factory, which date variously from the church's original construction through to 1937. The most famous of the windows is Miriam by Edward Burne-Jones.

Of the windows, eight are by Burne-Jones, and others by William Morris, Douglas Strachan, Ford Madox Brown, Karl Parsons and Selwyn Image. Tracery above the three west windows was done by Philip Webb.

Goldings is a Grade II listed Country House. From 1922 until 1967 it was used as a Dr Barnardo's Home. Several Barnardo's children are buried in the churchyard, which also contains graves of the Abel Smith family.