Wargrave is a village in Berkshire. The village is primarily on the River Thames but also along the confluence of the River Loddon.

The village has its own railway station on its short branch line, off the Great Western Railway to/from London Paddington; the village is quickly accessible to nearby parts of the M4 corridor, particularly Berkshire and Heathrow Airport and local major centres of employment include Reading and Bracknell, with smaller businesses and additional commercial facilities in nearby Henley on Thames and Wokingham. The town has many old listed buildings, two marinas with chandlery services for boats and a rowing club.

The village rises steeply to the north-west in the direction of Bowsey Hill, and higher parts of the village are generally known as Upper Wargrave. In Upper Wargrave is a Recreation Ground with a cricket club, bowls club and tennis club.

The name 'Wargrave' is derived from the Old English wær graf meaning 'Weir-Grove'; in the Assize Rolls and Patent Rolls of the Middle Ages it is recorded as 'Weregreave'.[1]

The village encloses in its west the meeting of the Loddon and the Thames. It is on the A321 north-south road between Twyford and Henley-on-Thames. On the opposite bank of the River Thames are the villages of Shiplake and Lower Shiplake. The hamlets of Hare Hatch and Cockpole Green are included in the parish.

Wargrave railway station is on the Henley Branch Line between Twyford (the next station south) and Henley-on-Thames. 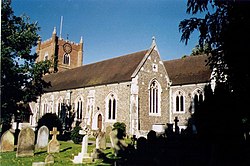 St Mary's dates from the 12th century and has the wide ecclesiastical parish of Wargrave with Knowl Hill.[2] It stands on Mill Green, off the High Street. In 1914 it was set on fire and gutted as a result of bizarre targeting for direct action by the Suffragette Movement. The north door remains from the 12th century, the tower from 1635 and the remaining structure was built following the fire. This is a Grade II* listed building.[3] 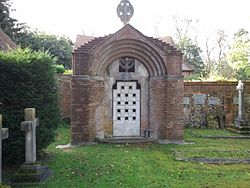 In the gardens of the churchyard is the Hannen Columbarium, built to house the remains of the Hannen family. It was designed by Edwin Lutyens and is considered an interesting example of his early work.[4]

The ashes of Sir Nicholas John Hannen, judge, his son, Nicholas "Beau" Hannen, actor, and Beau's wife Athene Seyler, also an actor, are all interred in the Columbarium.

Thomas Day (1748–1789), author and abolitionist, is also buried in the churchyard, after being fatally thrown from his horse. 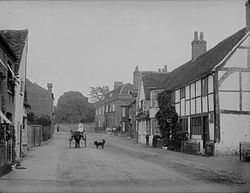 The first documentary evidence of the settlement was recorded in 1061 which indicates that is was a village and had a manor. The Domesday Book of 1086 records the manor as having a population of 250.[1] In the 13th century the current High Street was lined with plots and backstreets developed.

The village continued to develop into its current form in the 18th century growing up the hill from High Street eastwards so that by the end of the 19th century this axis, now Victoria Road, was fully settled.

At one time there were seven public houses on High Street, serving the stage coaches travelling between Henley-on-Thames and Reading; there are now only three. The pubs remaining today are the Bull, the Greyhound and the St George and Dragon. The Queen Victoria public house in Upper Wargrave recently closed and is being redeveloped into housing.

In the 20th century the village's population grew significantly, especially in the 1970s and '80s as new developments on farmland inside the parish boundaries responded to demand for housing for commuters working in and on the increasingly commercial western outskirts of London.

Architecturally, Wargrave Court was erected in the early Tudor period, altered and extended in the Georgian to post-Edwardian period.[5] Wargrave Manor occupies its mediæval site on the northern outskirts, bounded by its lower meadow that overlooks Wargrave Marsh below it, which is drained farmland downstream and the local primary floodplain. However this building, while also grade II listed, is larger, with a modest landscaped park. It is late Georgian and altered later in a painted stucco with moulded, chamfered quoins, moulding over second floor windows, hipped slate roof with several chimneys, spread over three storeys save for the wings. The east front has a conical roof over a protrusion of similar shape with three sash windows flanked by single bays with similar windows: all windows have architrave surrounds, ground floor windows having Victorian panes. This section has a Doric veranda with coupled columns supporting entablature across the whole front. Flanking wings have two upper sash windows and venetian windows on their ground floor. Its Victorian south front has 5 bays repeating the design and a central porch of angle pilasters supporting entablature and blocking course, above the double door is a radiating fanlight. The west front has a large Victorian semi-circular terrace in front.[6] 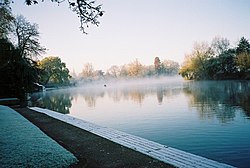 There are marinas and Wargrave Boating Club for those who use the River Thames for leisure and sport.

In August, the Wargrave & Shiplake Regatta is held over two days on the Shiplake riverbank opposite. The regatta combines serious and light-hearted racing in canoes, dinghies, dongolas and skiffs. It is the largest community event of the year having taken place since 1867.[7] The event ends with a large firework display on the Saturday night.

Wargrave is mentioned in Jerome K. Jerome's, 1889 book Three Men in a Boat, a humorous account of a boating holiday on the River Thames:

We caught a breeze, after lunch, which took us gently up past Wargrave and Shiplake. Mellowed in the drowsy sunlight of a summer's afternoon, Wargrave, nestling where the river bends, makes a sweet old picture as you pass it, and one that lingers long upon the retina of memory.

The “George and Dragon" at Wargrave boasts a sign, painted on the one side by Leslie, R.A., and on the other by Hodgson of that ilk. Leslie has depicted the fight; Hodgson has imagined the scene, "After the Fight"— George, the work done, enjoying his pint of beer.

Day, the author of Sandford and Merton, lived and—more credit to the place still—was killed at Wargrave.